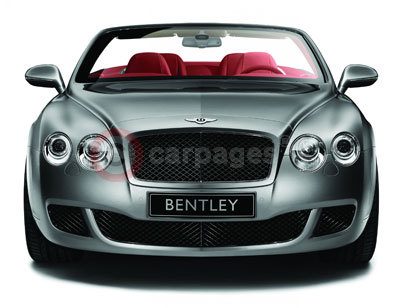 The Bentley Continental GTC and GTC Speed models are powered by Bentley's 6-litre, twin-turbocharged W12 engine which is produced exclusively at the company's Crewe engine plant. The Bentley W12 is the most compact 12-cylinder engine in production with 48 valves and 4 camshafts with continually variable valve timing. Power is transmitted via a ZF six-speed automatic transmission.

The new Bentley Continental GTC Speed is powered by Bentley's W12 engine in its most powerful, 600 bhp (610PS) form. It develops 15 per cent more torque and 9 per cent more power than the 552bhp (560PS) standard GTC.

Engine efficiency improvements result from the use of lower friction, lighter-weight components and a new engine management system, while twin, low inertia turbochargers with minimal turbo lag contribute to the W12 engine's flat torque curve. In 600 bhp (610PS) form, the W12 develops a maximum torque of 750 Nm (553 lb ft) from 1700 rev/min all the way up to 5600 rev/min. The GTC Speed engine is visually differentiated by the 'crackle black' finish to the intake manifold.

The six-speed transmission can be left in two fully automatic modes (Drive and Sport) or used as a clutchless manual where the driver can change gears sequentially, via either the gearlever or paddles mounted behind the steering wheel.

The advanced continuous all-wheel drive system of both GTC models provides exceptional traction in all weathers. The drive is transferred between the front and rear axles via a highly sensitive centre Torsen differential. If the differential detects a deviation in torque demand between the two axles it automatically sends more power to the wheels with greater grip.

Both the Bentley Continental GTC and GTC Speed also feature an advanced electronic stability programme (ESP 8.1). The 'Sport Traction' mode for the Bentley Continental GTC moderates ESP intervention at low speeds, benefiting driver interaction and control, particularly on low traction surfaces. The 'Dynamic Mode' of the GTC Speed allows increased wheel slip at higher speeds compared to the standard chassis. This ensures that torque is reinstated more quickly, allowing the driver to exploit the full potential of the engine.

"The new GTC Speed exemplifies our passion for creating cars that deliver exceptional performance and driving enjoyment. It is a driver's car which will redefine people's expectations of what a luxury convertible can achieve."