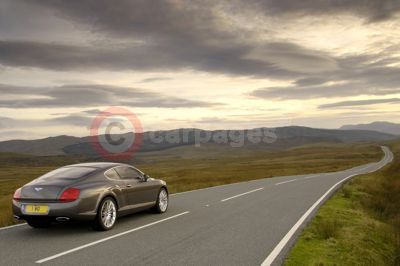 At the heart of both Continental GT models is the Bentley 6-litre, twin turbocharged W12 engine, the most compact 12-cylinder engine in production. The 48-valve head employs four camshafts and continually variable valve-timing. Power is transmitted via a ZF six-speed automatic transmission.

A host of engine and transmission enhancements have been introduced on the 552bhp (560PS) Continental GT to enhance both the refinement and efficiency of this high technology powertrain. These include:

For the Continental GT, the engine continues to produce 552bhp (560PS / 412kW) at 6100 rev/min and a maximum torque of 650Nm (479lb ft) from1600 rev/min. The twin, low-inertia turbochargers are a key factor in producing the flat torque curve, characteristic of every Bentley.

A new higher output of the W12 engine is specified for the GT Speed, sharing engine efficiency improvements with the GT model. New lighter weight con rods enhance engine response, while new pistons, with anodised compression ring grooves, are designed to withstand increased cylinder pressures. Together with a recalibrated version of the new engine management system, the GT Speed develops nine per cent more power than the GT - 600bhp (610PS) at 6000 rev/min. The maximum torque of 750Nm (553lb ft) at 1750 rev/min represents an increase of over 15 per cent versus the standard engine. As a result, the GT Speed becomes the first production Bentley to top 200mph (322km/h), with a V-max of 202mph (326km/h).

Both the Continental GT Speed and GT models now produce lower CO2 emissions of 396g/km, down from 410g/km, an improvement of 3.5 per cent. Fuel consumption is improved by a similar amount.

“The Continental GT will continue to be the benchmark for the luxury coupe class, offering an unrivalled blend of performance and refinement. The new Continental GT Speed is a true driver’s car with immense power and superb handling.”

The advanced ZF 6HP26 six-speed automatic gearbox has the ability to lock up its torque converter during normal driving conditions replicating the immediacy of a manual transmission while maintaining the smoothness of an automatic. A manual override function allows clutchless manual changes via the gearlever or steering wheel paddles.

Providing huge levels of grip and stability in all weather conditions, the all-wheel drive system harnesses the prodigious power and torque of both the Continental GT and GT Speed coupes. The system uses a central Torsen differential and a differential on both the front and rear axles providing a standard 50:50 torque split. This front to rear ratio is variable depending on the available grip and the system can sense slip of less than one per cent and react by apportioning the engine's torque to either the front or rear axle.

The advanced electronic stability programme (ESP) has been uprated to ESP 8.1 for both models. The Continental GT has a new “Sport Traction” mode that moderates ESP intervention at low speeds, providing a greater degree of driver interaction and control. This is particularly beneficial from standing starts, for example when pulling away uphill on low traction surfaces.

The Continental GT Speed offers a new 'Dynamic Mode' that allows increased wheel slip at higher speeds than the 'Sport Traction' mode on the standard chassis. Torque is reinstated more quickly after the traction control system is triggered, giving the spirited driver a greater sense of control and the ability to exploit the full potential of the new engine.