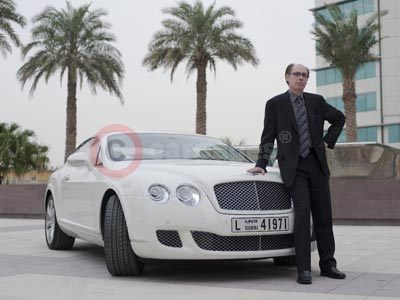 Bond is back, and as ever he is sporting the best in luxury cars. In the pages of Carte Blanche, the new James Bond book by international best-selling author Jeffery Deaver, the fictional British spy has continued with his classic preference of luxury sports car by selecting the breathtaking new Bentley Continental GT as his transport of choice.

Carte Blanche is due to be published by Hodder and Stoughton in the UK on May 26, a few days before the anniversary of Fleming's birthday. It has been commissioned by Ian Fleming Publications Ltd.

The book is partly set in Dubai, which is where the author and the new Bond car have been spotted, outside the InterContinental Hotel in Dubai Festival City. Bond's new Bentley Continental GT certainly suits his character, with a fabled 6.0-litre, W12, twin-turbo engine capable of producing 567 bhp and 516 lb-ft of torque.

While James Bond's new car may be better suited for a secret agent in understated tones, the author of the book admired a less inconspicuous model. Set in stunning white with a blood-red interior, the new Bentley Continental GT mixes svelte good looks with power, poise and exceptional prowess. The hand-stitched leather interior contains all the high-tech gadgetry Bond could ever need. And with the famed sound dampening that only lets through the captivating sound of the wonderful engine, the cabin provides a true Quantum of Solace for Fleming's jet-setting gentleman spy.

Jeffery Deaver sampled the stunning vehicle on his recent visit to the Emirates, where he commented, "I'm really excited about being back in Dubai. It is an inspirational and awe-inspiring city and makes a perfect Bond location - especially for a novel that pushes our hero to new extremes."

Regarding the book's title, which was revealed in January, Deaver added: "In the world of espionage, giving an agent carte blanche on a mission comes with an enormous amount of trust and constantly tests both personal and professional judgement. Part of the nonstop suspense in the novel is the looming question of what is acceptable in matters of national and international security. Are there lines that even James Bond should not cross?"

The James Bond of Ian Fleming's original novels also opted for a Bentley. The world's most famous spy would choose nothing less than the scintillating performance and second-to-none quality of the classic luxury car.

Jeffery Deaver has written 28 novels and sold more than 20m books worldwide. He is best known for his Kathryn Dance and Lincoln Rhyme books, most notably The Bone Collector, which was adapted for film in 1999, starring Denzel Washington and Angelina Jolie. Before becoming a full-time author, Deaver was a journalist, like Fleming, and attorney. He started writing suspense novels on the long commute to and from his office on Wall Street. His books are now translated into 25 languages and he lives in North Carolina.