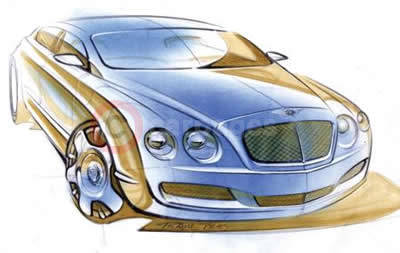 In short it would be a sporting Grand Tourer with substantial rear legroom for passengers, a stunning interior and breathtaking cabin materials; a car capable of travelling great distances with ease while delivering immense driving pleasure - in other words, a consummate Bentley.

Design director Dirk van Braeckel created the car's bold and contemporary look at exactly the same time as its sister car, the Continental GT, thereby ensuring a consistency of image and appearance between the coupé and the equally potent four-door version.

Where the Continental GT coupé drew inspiration from the iconic 1952 Bentley R-Type Continental, the roots of the new four-door can be seen in the equally desirable and admired 1957 four-door Continental Flying Spur; the car from which the new model takes its name.

Clean, contemporary lines stand out on every surface of the new Continental Flying Spur, an effect that was a primary aim of Dirk van Braeckel and his design team, who were keen to ensure that the car was evocative, timeless and unostentatious. This design theme is key to the future direction of all Bentleys, one in which the past will serve as inspiration but won't dominate the end product. The Continental Flying Spur's look is intended to offer owners both individuality and understatement.

"One of the virtues of the Bentley brand has always been understatement," says van Braeckel. "Even in the early days, many people preferred Bentleys to other more ostentatious cars."

Where design cues have been evolved from past Bentleys, they are interpreted in a manner that befits a modern four-door Grand Tourer. Central to the Continental Flying Spur's appearance is the rounded C-pillar behind the rear doors - a motif found on many early Bentleys. This 'hockey stick' curve adds tension and sportiness to the car's profile.

The extra length of the Continental Flying Spur compared to the coupé emphasises the waistline of the car, creating the impression of a deep, solid body that offers seclusion and privacy to its occupants. The elongated profile also benefits the car's aerodynamic properties, critical when a top speed of 195mph is attainable. The body of the new Continental Flying Spur is also immensely stiff (46Hz resonance frequency) for both strength and durability.

"We have paid very close attention to the air flow over the car," says Bentley's head of exterior design, Raul Pires. "The rear bumper is specifically shaped to funnel air out cleanly from the underbody diffuser and the small aerofoil lip on the trailing edge of the bootlid provides downforce and stability at high speed. The four-door has an even better drag coefficient than the Continental GT - 0.31Cd compared to the coupé's 0.32Cd."