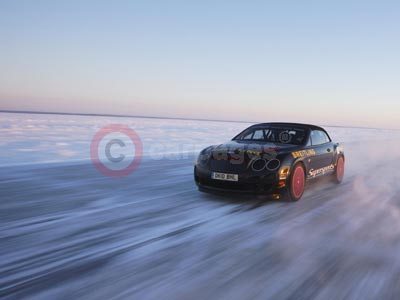 Finland's four-time world rally champion Juha Kankkunen drove a Bentley Continental Supersports convertible on the hazardous frozen waters of the Baltic Sea, off the coast of Finland, at a breathtaking 205.48 mph (330.695 km/h) to set a new world speed record on ice.

Kankkunen was in irresistible form with his all-wheel drive, 6-litre, 12-cylinder Bentley Continental Supersports convertible which, in line with the Company's CO2 strategy, ran on biofuel. The world's fastest soft top enabled Juha to shatter his own 2007 world ice speed record of 199.83 mph (321.6 km/h) set in the Bentley Continental GT at the same location.

With the help of his own experienced team and Bentley engineers, Kankkunen overcame the challenges of temperatures as low as minus 30 degrees, sudden snow blizzards and potentially dangerous crosswinds on the 16.5km track on a 70cm-thick layer of sea ice. The record attempt was driven on a 1000m long measured distance with the speed certified by officials from the Finland Traffic Police. His new world record was based on the average of two runs in opposite directions with measured speeds ratified by a representative of The Guinness Book of Records.

"The last time, I narrowly missed the magical 200 mph mark in a Continental GT. When I heard about the Supersports I was determined to go record breaking again with the Bentley Boys. This time, with over 600bhp under the bonnet, a Quickshift transmission and the security of the all-wheel drive system, the Supersports convertible was the perfect car to go for the record." Kankkunen said.

"200mph came up after 5km on sheet ice. Then it was just a question of getting everything right in the timing zone and hoping the snow kept away. There's nothing to beat driving a Bentley at these speeds; the conditions may be perilous but the car responds so well to the slightest adjustment which gives you the confidence to push even harder."

As with the previous record-breaking drive in the Bentley Continental GT the Anglo-Finnish team used a car with minimum modification. A fully-welded, heavy-duty safety roll-cage, along with Pirelli winter tyres (Pirelli SottoZero II 275/40R20) and a rear bumper-mounted parachute provided reassurance in case of an emergency. Front and rear spoilers provided optimum high speed stability on the treacherous surface.

To highlight Bentley's environmental commitment to sustainable fuel sources, Kankkunen's Supersports Convertible was fuelled with E85 bioethanol rather than petrol. All models in the Continental range are capable of running on petrol, E85 bioethanol or any combination of the two.

Wolfgang Durheimer, Bentley's new Chairman and Chief Executive, said: "The ice speed record is an amazing feat by Juha Kankkunen, whose skill and courage in extreme conditions truly make him one of the modern-day Bentley Boys. We will be celebrating this achievement with a very special 'extreme' Bentley, which will be the most powerful model ever to bear the famed Winged B emblem."

A limited edition of just 100 examples of this most extreme Bentley Continental Supersports will be made and the car will make its global debut at the Geneva Motor Show on 1st March 2011.