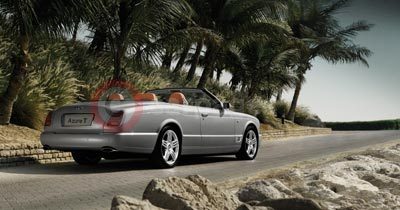 Stylish and Powerful | Part One
A Unique Open-Top Motoring Experience

Based on the Bentley Azure, the Azure T offers a range of discreet exterior cues that further enhance its powerful stance and hint at its increased performance potential. Key ingredients of its distinctive appearance include design features such as 20-inch five-spoke, two-piece alloy wheels and ‘Le Mans’ lower front wing air vents.

Further distinguishing points from the Bentley Azure are standard features such as dark-tinted upper and lower grilles, ‘jewel’ fuel filler cap (made from billet aluminium) and door mirror mountings finished in body colour.

Like the Bentley Brooklands, the Azure T sports the iconic Flying ‘B’ mascot, which can retract neatly into the grille surround.  Originally designed by motoring artist F. Gordon Crosby, the ‘B’ was first used on the 1930 Bentley 8-Litre.

With exterior lines that echo visual elements of the Bentley Mk.6 from 1946, the Azure was enthusiastically received on its original debut as a concept car at the Los Angeles Show in January 2005. Now, as the Bentley Azure T makes its own ‘debut’ at LA, Raul Pires, Manager of Exterior design for Bentley Motors, notes:

“The Azure’s proportions provided us with the ideal platform to work with when creating the new Azure T. The prominent haunches and ‘supermodel’ body inspired our designers to create a new interpretation of a Bentley convertible with the accent placed on a more muscular, sporting stance.”

Bentley’s designers highlight the 1955 Park Ward S1 Drophead Coupé and 1995 Azure as the main influences for the current Azure and Azure T. Like the ’50s convertible, the car has a deep body with a single feature line that runs along both flanks and rises at the powerful rear haunches before spearing off at the rear of the car. Similarly, the Azure T’s fast and flowing roofline is echoed in its seven-bow canvas roof that gives the car a visible sporting profile when raised.

Prominent wheel arches grace a slender, narrowing boot that results in a ‘horse shoe’ trailing edge. This elegant shape is reminiscent of the first Crewe-built Bentley, the Mk.6, and the overall effect is a subtle hint at the power and performance that lies beneath the Azure T’s bodywork.

Delicate brightware detailing accentuates the flowing lines of the Azure T and this includes rear tail-lamp bezels, exhaust finishes and slender strips that run the length of the car.

Significant time and effort has gone into making the Bentley Azure T Convertible's folding roof attractive as well as highly functional. Operated hydraulically at the touch of a switch, the impressive, three-layer canvas roof is elegantly stowed beneath the rear parcel shelf in a matter of 25 seconds. Because the roof is held in a separate well area, there is no impact on the generous boot space which was designed to hold two sets of golf clubs and hand luggage.

This is a 14-year+ news article, from our Bentley archive, which dates back to the year 2000.

If in doubt check with your local Bentley dealer as car prices and technical data will have changed since 2008.

Bentley Azure Images may not be UK specification cars. Colours and exterior and/or interior elements may differ from actual models.