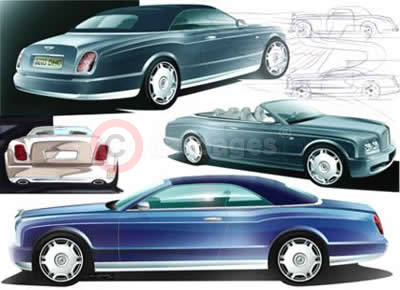 Bentley’s design team cites the 1955 Park Ward Continental Drophead Coupe and 1995 Azure as its main influences for the Arnage Drophead Coupe show car. Like the ’50s convertible, the car has a deep body with a single feature line that runs along both flanks and rises at the powerful rear haunches before spearing off at the rear of the car. Similarly, the Azure’s fast and flowing roofline is echoed in the show car’s stunning seven-bow canvas roof that gives the car such a visible sporting profile when raised.

"The Arnage Drophead Coupe is the latest in a long line of much-admired Bentley convertibles and we wanted to reflect that heritage as directly as possible," says Dirk van Braeckel, director of design, Bentley Motors. "The key to a four-seater convertible is that its grace and elegance is on display when the roof is down but it shouldn’t lose any of that beauty when it is raised. We think we have struck that balance with the beautiful lines of the roof."

That objective was achieved, explains Bentley’s head of exterior design Raul Pires by inclining the windscreen as far back as possible - the car is 25mm lower than an Arnage. "We have tried to make the roof look as ‘fast’ as we can," he says. "The result is a design that combines fluidity, sportiness and elegance."

A new rear boot section also helps to accentuate the contemporary feel of the new convertible. Prominent wheel arches grace a slender, narrowing boot that results in a ‘horse shoe’ trailing edge. This graceful shape is reminiscent of the first Crewe-built

Bentley, the 1946 MK6, and the overall effect is a subtle nod to the power and performance that lies beneath the stunning Meteor Blue bodywork.

New LED rear tail-lamps use technology borrowed from the Continental GT Coupe range; while a chrome surround echoes the Arnage front head-lamp units. Further brightwork is found in the form of chrome exhaust finishers and handcrafted chrome bumpers and sills that extend around the entire car and sit alongside unique, six-spoke, 19-inch chrome-finished alloy wheels.

Of course, the nature of a convertible means that its interior is often on display as much as its exterior and the design team knew that the car’s spacious cabin would need to make as big a statement as its stunning body. The decision was taken early on in the programme to design a rear-seat compartment that captures some of the exquisite feel and look of earlier Bentley convertibles.

"The Continental Drophead Coupe from 1955 had a wonderfully understated but luxurious interior," says Robin Page, head of interior design, Bentley Motors. "For example, the doors had simple armrests with a leather pad on them and we have reflected that in this car’s hide-trimmed armrests that run the length of the cabin sides and appear to be suspended away from the door’s actual surface.

"Similarly, we admired the fluted leather in earlier drophead Continentals and echoed that with the vast amounts of warm and inviting leather hide that extends past the seats and onto the parcel shelf, thereby emphasising the impressive dimensions of the rear compartment."

It’s not only heritage that influenced the Arnage Drophead Coupe’s look and feel. The interior design team appreciated the simplicity of the contemporary Peel chair created by Norwegian Olav Eldoy, who recognised that the swirling curve of a slice of orange peel could be the concept for a body-hugging seat. Those same principles are reflected in the curving rear seat and arm rest. For added atmosphere, indirect lighting casts a warm glow of light behind the door arm rests.

As in every Bentley, peerless craftsmanship is to the fore in the cabin. Beautiful Burr Oak veneers with a Boxwood inlay act as a counterpoint to the Cotswold and Nautic Blue leather while a wooden steering wheel with inlayed chrome rim is unique to the car.

Bentley Arnage Images may not be UK specification cars. Colours and exterior and/or interior elements may differ from actual models.