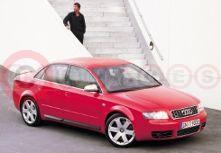 The starring roles on the Audi stand at the British International Motor Show 2002 will be filled by the ultra-sophisticated A8 luxury saloon and the potent S4 quattro - both key all-new V8-engined models that will make their first British public appearances in Birmingham.

Showcasing Audi advanced technology, the all new aluminium-bodied Audi A8 luxury saloon will provide as much food for thought as its revolutionary ancestor. Britain's appetite for exceptional performance will also be satisfied by the all-new S4 quattro saloon and Avant - the first ever manual transmission V8 Audis to reach the UK. Prices for the pair, which swap their predecessors' V6 engine for the potent 4.2-litre, 344bhp eight-cylinder unit, have just been confirmed at £36,150 and £37,280 respectively.

British prices for the UK specification A8 models will be released on Press Day at the Show, which this year falls on Tuesday October 22nd.

The New Audi A8

Due in the UK in the spring of 2003, the new Audi A8 will be a fitting successor to its convention-challenging predecessor, first shown in production ready form at the Geneva Show as long ago as 1994.

The newcomer will be notable not just for its advanced lightweight aluminium space frame body shell, but also for its sophisticated driver adjustable air suspension, its unique-in-sector quattro four-wheel-drive and the futuristic Multi Media Interface dashboard computer which controls many of its in-car functions.

A full range of petrol and TDI diesel engines will be gradually phased in for British A8 models. Initially, power will be provided by 3.7-litre and 4.2-litre V8 petrol units, delivering 280bhp and 335bhp through a new six-speed Tiptronic automatic transmission. These highly refined engines, combined with the unparalleled lightness of the aluminium Audi Space Frame, contribute to class leading power-to-weight ratios, and a feeling of agility rarely achievable in a luxury or D-Segment car.

This agility is also attributable to the lightweight aluminium running gear, which incorporates air suspension with continuously variable damper settings capable of adapting to suit the prevailing road conditions. Four pre-determined spring and damper settings can also be selected by the driver using the Multi Media Interface control.

MMI also brings together the user interfaces of other major functions such as audio, DVD satellite navigation, television and telephone at one central location, and uses the same operating principles to control them all. As a result, using the retractable dashboard screen and its logically positioned rotary and push button function controls very quickly becomes second nature.

Among the many other innovations is an 'Advanced Key' feature, allowing the driver to lock and unlock the vehicle, and start the engine, without removing the key from his or her bag or pocket. The engine is started at the touch of a button, which also incorporates a sensor capable of storing a driver's fingerprint. This unique 'signature' is then recognised every time the vehicle is started, enabling the driver's preferred settings for everything from the seats to the radio volume to be stored along with the fingerprint, and then automatically reset to the driver's requirements as soon as he or she touches the button.

On the move, new 'adaptive light' cornering lights work in conjunction with the xenon plus gas discharge headlamps. These additional lighting tubes are positioned between the dipped and full beam headlights, and either the left or right unit is activated by the central control unit depending on a variety of factors such as road speed, the steering angle and the turn indicator which is operated. The forthcoming corner or turn is then pinpointed by the beam of light, and can be negotiated more safely and easily.

Exceptional power and understated style characterise the Audi S quattro Series, and the all-new S4 quattro is a perfect continuation of the theme.

Its extraordinary performance is provided by a 4.2-litre V8, which is safely contained by quattro permanent four-wheel-drive and, for the first time in Britain in an eight-cylinder Audi, is linked to a six-speed manual gearbox.

At just 464 millimetres in length, the V8 fits comfortably into the A4 engine bay, thanks in part to the installation of a chain drive for camshafts and ancillaries on the engine output side.

Using the A4's acclaimed four link front and trapezoidal link rear suspension as a foundation, the S4 quattro's lightweight aluminium set-up has been tuned for maximum agility, precision and composure. Ride comfort also benefits from the low unsprung weight made possible by the aluminium components.

Subtle differences mark out the S4 quattro from its A4 counterparts. Colour coded bumpers with large air inlets in the nose, xenon headlights with a contrasting titanium-coloured inner housing, large diameter exhaust tailpipes, polished aluminium exterior mirrors and a discreet rear spoiler are the only real indicators that this is an extra special Audi.

Among the other highlight models on the Audi stand will be:

The new A2 1.6 FSI, with a new 1.6-litre, 110bhp petrol engine incorporating a sophisticated direct fuel injection system. Thanks to the system's extremely accurate fuel metering, the nimble hatchback strikes the best possible balance between performance, economy and clean running.

A 0-62mph acceleration time of 9.8 seconds is combined with the potential to cover up to 47.9 miles per gallon (combined cycle). Equally importantly, these figures are achieved with a minimal CO2 output which positions the A2 FSI in the lowest of the emissions-linked taxation brackets.

The RS 6 quattro, powered by a twin-turbocharged 4.2-litre V8 petrol engine with 450bhp, refined by a new adaptive Dynamic Ride Control system and kept in check by quattro four-wheel-drive. The Audi RS 6 quattro can cover the 0-62mph sprint in just 4.7 seconds, reach 124mph in an even more impressive 17.6 seconds and continue to an electronically limited 155mph maximum speed.

The Audi Cabriolet, the 161st open-top model to feature on the Audi family tree in the past 100 years. Based on the acclaimed A4 saloon, yet sharing none of its body panels, the much admired Cabriolet features a choice of smooth and refined 2.4 or 3.0 V6 petrol engines and, in the near future, will be available with a 2.5 TDI V6 diesel.