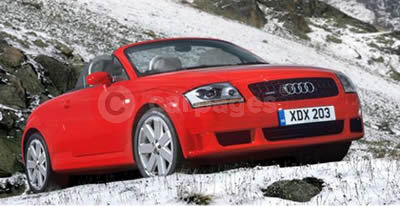 Father Christmas must brush up his image and swap his sleigh for an Audi TT sports car, according to Christmas questionnaire

Santa’s draughty, ultra-high mileage sleigh and rheumatic reindeer should be decommissioned and replaced by an Audi TT Roadster, according to a survey undertaken by London’s Tower Bridge Exhibition.

The special Christmas questionnaire, which asked 500 children aged between eight and 14 for their views on how Father Christmas could update his image for the 21st Century, revealed that the Audi TT sports car is seen as the ideal sleigh substitute for the natty Noughties Santa.

The sample of Britain’s children also had a very different idea of how Santa should dress, favouring a hooded top or ‘hoodie’ and trainers over the traditional red and white robe and sensible boots first popularised in advertisements by a certain American cola drink company in the 1930s.

Kevin Rose, Director of Audi UK, is keen to add Mr Claus to the list of 78,000 customers who have joined the Audi UK customer base in 2004. "Santa would make a great brand ambassador for Audi - he runs the world’s most efficient parcel distribution service and is revered globally as a symbol of generosity and kindness. It’s intriguing to know that Britain’s youth rates our TT so highly as to recommend it for the ultimate Christmas hero."