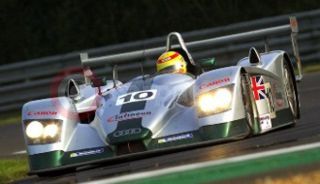 The rarest and most expensive Audi model – the all conquering Audi R8 Le Mans prototype racer – which costs almost £2 million to buy and run for a year, is celebrating its fourth Le Mans victory this month in its fourth year as a world beater. But for only £7.95, Audi is releasing a DVD of the car in action at this year’s event.

The R8, which costs 100-times more than the average road going Audi, is the most successful sports racing car over the past decade, having achieved almost 40 race wins including its historic run of consecutive victories at Le Mans since the car’s début in 2000. From 48 race starts, an Audi R8 has achieved 39 endurance sportscar race wins, 43 pole-positions and 42 race fastest laps.

Britain’s Johnny Herbert and Allan McNish have both scored victories in the 200mph "supercar" which pioneered Audi’s fuel-efficient FSI [direct petrol injection] system - technology that can now be sampled on the Audi A2, A3 and A4 model range.

Even devoted sportscar or Le Mans fans may find the estimated £2,000,000 too excessive to own and race an Audi R8 at Le Mans. Thanks to the British importer, Audi UK can now bring you a behind-the-scenes documentary of their 2003 Le Mans 24 Hour race campaign direct to your living room.

While the Audi Sport UK team’s French race result was not the one they had hoped for, the 60-minute programme, available now on DVD for £7.95 (including UK post & packing), is an absorbing compilation of the British team’s build-up to the race last June. The film also includes footage from the 2003 Sebring 12-Hour race and the 2003 Le Mans test weekend.

Audi’s 2004 motorsport programme is still being finalised although its likely the already amazing Audi R8 "Roll-of-Honour" will be further embellished by the German manufacturer’s "customer" teams in America, Britain and Japan around the world next season.