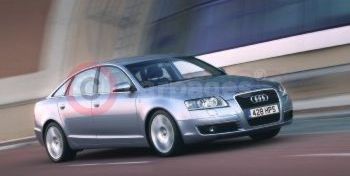 For its British public debut at the 2004 Sunday Times Motor Show Live, the new Audi A6 is to make its mark by filling every available metre of display space on the Audi stand. Six examples of the latest executive Audi will form the company’s NEC display, with no other models exhibited.

The latest state-of-the-art executive saloon from the Vorsprung durch Technik brand is available to order now, and officially on sale in the UK from June 12. The launch range features three completely new V6 engines – a 2.4 petrol with 177PS, a 3.2 FSI petrol with 256PS and an advanced 3.0 TDI V6 with new piezo injection technology delivering 225PS. A 4.2-litre petrol V8 with 335PS powers flagship models. OTR prices will range from £24,425 to £43,025.

"This is a major benchmark car for Audi in a crucial segment for a premium luxury car maker, and we want to give the all-new A6 the exposure it deserves in Birmingham," said Kevin Rose, Director of Audi UK.

"This is the first chance the British public will have to see the car ‘in the flesh’, so visual impact is important. The last time we staged a one-model-only stand in Birmingham was for the British TT launch in 1999, and that car is hugely popular in Britain," he added.

Longer, wider, more spacious and with more boot capacity than all key rivals - not to mention larger competitors in the luxury segment - the new A6 majors on comfort and refinement without ruling out a sporting drive. The latest Audi dynamic fully independent multi-link suspension, combined with either front-wheel-drive or unique-in-class quattro permanent four-wheel-drive, handles demanding corners as deftly as it irons out rough road surfaces. It is helped in both respects by a 35 per cent increase in body rigidity compared with the previous model and an 83mm increase in wheel base length.

As well as the evident extra space it offers thanks in part to the longer wheel base, the cabin of the new A6 saloon has also won praise for its outstanding build quality, its style and its technological content. A version of the Multi Media Interface (MMI) control system seen first in the Audi A8 is fitted as standard to all A6 models, as are enhancements such as cruise control, a CD stereo system, automatic light and wiper activation and servo assisted boot lid locking. From 2005, options including adaptive light cornering lights, electronic tyre pressure monitoring and radar-assisted distance control will also be added.