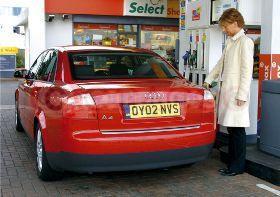 New Sulphur-Free Petrol Arrives In The UK In 2003 Bringing Further Benefits To Drivers Of Audi FSI Models
New sulphur-free petrol with the potential to reduce environmental impact, bring down running costs and improve performance will start to filter into UK filling stations early in 2003, and Audi has already fielded the technology needed to capitalise on its benefits.

Sulphur-free petrol will help to deliver lower carbon dioxide emissions, and at the same time will optimise the performance of the latest fuel-efficient Audi FSI direct injection petrol engines, two of which can already be found in A2 and A4 FSI models. Industry speculation suggests that the new fuel may also attract a tax incentive of between 1 and 3 pence per litre in the Chancellor’s predicted announcement later this month, which could equate to a saving of around £1.50 at every fill-up for the average motorist.

Classified as containing a maximum of 10 parts per million of sulphur, the new fuel will be phased into Britain closely behind Germany, where the vast majority of the country’s estimated 16,000 filling stations will switch to sulphur-free from January 1st, 2003. As soon as it becomes available, the benefits of the A2 1.6 FSI (£13,895 - £14,895) and the A4 2.0 FSI saloon and Avant (£19,565 - £20,695) will be brought into even sharper focus. Both models feature FSI stratified direct petrol injection, which enables exceptionally accurate fuel metering and combustion, and thereby keeps fuel usage and emissions to an absolute minimum, without any performance penalty.

All British filling stations now deliver unleaded petrol that is classified as Ultra Low Sulphur, and have done since mid 2001. Containing a maximum of 50 parts per million of sulphur, ULS fuel has already brought significant performance improvements to drivers of FSI models, and the arrival of sulphur-free fuel will obviously enhance this further.