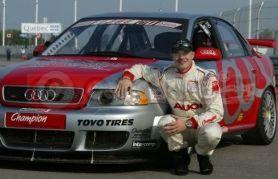 "I briefly drove the Audi at Sebring in March and the Champion team suggested they’d like me to race it," confirmed Marino. "I tested the S4 for a second time at the Virginia International Raceway recently (25 Jul). The Audi has masses of power and the ‘normal’ road tyres make it a real challenge to drive. I was very happy afterwards because I was matching Galati’s times on my first visit to the Virginia track. I’m really looking forward to racing it."

Franchitti will contest the final round of the series at Virginia on 25-27 October. Marino, who won the Scottish Open Kart Championship in 1988 and the Scottish Pro-Kart title in ’93, is the reigning British GTO Champion and has spent this year racing in America.

The unique four-wheel-drive Audi is an amalgamation of the road-going Audi S4 quattro saloon and Audi RS 4 Avant quattro. The RS 4’s 2.7-litre, 30-valve V6 engine is only mildly boosted producing around 450bhp compared to the road-going RS 4’s 380bhp.

The S4 racer was designed and built at Audi Sport UK in Buckingham specifically for a racing programme in North America. The Audi is run by the Florida-based Champion Racing team.

Allan McNish, from Dumfries, won the American Le Mans Series title for Audi in 2000 - a category currently led by Audi’s Tom Kristensen and in which the Champion team field former Grand Prix drivers Johnny Herbert and Stefan Johansson in an Audi R8 - a 220mph sportscar that has won the Le Mans 24 Hours for the last three years.