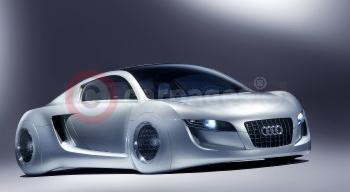 A spectacular Audi sports car destined for the big screen was presented to the public for the first time today at the New York International Automobile Show. The futuristic Audi RSQ sports coupé - the most ambitious product placement project ever undertaken by Audi - has been created by Audi Design for the epic Twentieth Century Fox motion picture „I, ROBOT", due for release in the US on July 16, and in the UK around one month later. Its starring role will be as personal transport for leading actor Will Smith - a homicide detective in the year 2035 – during his quest to solve a mystery that could have grave consequences for the human race.

„I, ROBOT" is set at a time in the near future when technology and robots have become a trusted part of everyday life. That trust is subsequently broken and one man, alone against the system, sees it coming. The film, directed by Alex Proyas (Dark City, The Crow) and depicting a world created by famed science fiction writer Isaac Asimov in his short story collection "I, ROBOT", employs stunning special effects so far unmatched on the big screen to bring a world of robots to life.

The RSQ sports coupé is the first car to be developed by Audi specifically for a major Hollywood motion picture. It is a visionary interpretation of Audi’s typical design language, yet despite its extreme character retains features of early 21st Century Audi models, including the single frame front grille that can be seen in the A8 L 6.0 quattro luxury saloon and the forthcoming A6 executive saloon.

At the request of movie director Alex Proyas, the mid-engined sports car races through the Chicago of the future not on wheels but on spheres. Its two doors are rear-hinged to the body’s C-pillars and open according to the butterfly principle.

With this project Audi opens up a new chapter in product placement. Previously, the brand with the four rings has always supplied volume-production cars to movie productions. In individual cases, such as the Tom Cruise blockbuster

"Mission Impossible II," these cars were even used in movies before their market launch. With „I, ROBOT" and the systematic development of a "car of the future," Audi goes far beyond its previous product placement activities.