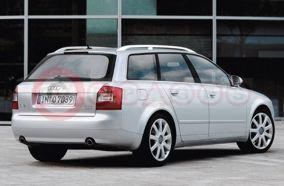 Over 20 years since it first revolutionised motor sport, Audi’s pioneering quattro four-wheel-drive transmission system continues to underpin pace-setting road and race-bred Audi models. Its all-weather control and composure has just helped racing legend Derek Bell and team mate Mike Galati add another successful chapter to the Audi record books in an S4 quattro ‘Competition’ racer. In 2003, it will safely contain a potent new, road-going S4 quattro with 344bhp and a new 190bhp version of the A4 1.8 T quattro.

Engineered by quattro GmbH, the Audi high performance subsidiary responsible for the renowned RS quattro models, the new A4 1.8 T quattro is due in the UK early on in 2003. It will be powered by a new version of the accomplished 1.8-litre turbocharged engine offering 190bhp and 240Nm (177lb ft) of torque, and will be the first of the current A4 1.8 T models to be equipped with a six-speed manual gearbox.

These six closely spaced ratios will help the A4 1.8 T quattro reach 62mph from rest in 8.3 seconds and continue to a 147mph maximum speed. Despite this impressive performance, it is also capable of covering 29.7mpg on the combined cycle. CO2 output is 228g/km (Avant 230g/km).

The new additions to the A4 line-up will be distinguishable externally from the continuing, 163bhp A4 1.8 T models by way of their boot-mounted red ‘T’ emblems. The car pictured in the accompanying photograph also features fully body-coloured bumpers, which are being considered for introduction as an option across the A4 saloon and Avant ranges in 2003.

The A4 1.8 T quattro’s lightweight aluminium set-up has been tuned for maximum agility, precision and composure, and is of course backed up by the steadying influence of the quick-reacting quattro permanent four-wheel-drive system. Ride comfort also benefits from the low unsprung weight made possible by the aluminium components.

This same combination of lightweight suspension and quattro control also ensures that drivers of the new Audi S4 quattro can fully exploit the 344bhp offered by its 4.2-litre V8 petrol engine. Spurred on by an impressive 410Nm of torque, and notable as the first V8-powered Audi model in Britain to feature a manual gearbox, the S4 quattro can power to 62mph in 5.6 seconds, to 124mph in 20.6 seconds and then on to an electronically limited 155mph.

On the race circuit, the quattro system has yet again proved that it has the measure of more basic drive layouts. Racing legend Derek Bell and his Sicilian team-mate

This victory is all the more impressive because the 430bhp, 2.7-litre Audis were competing against considerably more powerful cars, and were weighed down by huge amounts of ballast to artificially compensate for the undeniable advantages of Audi’s four-wheel-drive system.

Bell, from Pagham in Sussex, commented: "Audi has won the World Challenge title for the past two years after finishing second in our first season with the S4 in 2000. I personally finished seventh in the championship this year, while the Audi has chalked up eight wins in 26 top-five placings in three seasons. I started my career almost 40 years ago and I still savour every moment thanks to Audi."

Audi changed the face of world rallying forever in the early 80s when it introduced permanent four-wheel-drive technology and subsequently switched its all-wheel-drive concept to dominate touring car racing worldwide in the 1990s. Audi then switched to long-distance sportscar racing and in June won the prestigious Le Mans 24 Hour motor race for a third consecutive year.