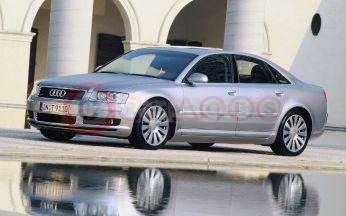 If the sequence is changed, for instance if a vehicle is removed from the production line for auditing, blanks known as ‘body buffers’ are inserted to maintain the original sequence. In order to compensate for these sequence changes, innovative planning and control computer software has been specially developed.

Another important benefit of the new system, particularly for maintenance of the vehicle sequence, is the ability to predict parts requirements more accurately. The consistent availability of parts makes the entire production process more stable.

Last year, prior to the introduction of the new manufacturing process, the daily production figures exceeded 1,000 vehicles per day for the first time. In addition to the A2, A6, allroad quattro and A8 models, the Audi RS 6 quattro (saloon and Avant) are built. Annual production at the Neckarsulm plant of all types, amounts to around 250,000 vehicles.

The Neckarsulm plant has gained world-wide recognition for its contribution to technical innovation. It produced the first NSU model with bodywork made completely of aluminium (1913), and it was also responsible for the streamlined, record-breaking vehicles of 1956, the NSU Wankel engine (1957), Audi’s TDI engines (1989) and its latest World beating Le Mans 24 Hour race winning engines.

Since the establishment of the aluminium centre and the start of production of lightweight, Audi Space Frame (ASF) aluminium bodies in 1995, the Audi plant has achieved an impressive volume of productivity. Over 200,000 aluminium-bodied vehicles have now been produced using the unique Audi space-frame technology.

In 1905 the first cars manufactured in Neckarsulm, left the plant. At the same time, NSU engineers were working on building a three-wheeler. The following year a new epoch in the history of the plant began with the construction of the "Original Neckarsulm Motorcar".

Famous cars such as the first prototype for the VW Beetle, NSU Prinz, NSU/Wankel Spider, NSU TT, NSU Ro 80, Audi 100, Audi 200 and the Audi Cabriolet have since left the lines at this production plant.

The annual production of vehicles has increased continuously since 1906. From 1957, a total of 1.2 million NSU vehicles were produced, while the last NSU Ro 80 left the production lines in Neckarsulm in March 1977, bringing to an end the line of models bearing the famous name of NSU.

After the merger to form Audi NSU Auto Union AG (1969), the first Audi 100 rolled off the line in 1970. This model and its current successor, the Audi A6, have developed to become the most important "breadwinner" of the plant to date.

In 1966, with the Audi A6, the original all aluminium Audi A8 (launched in 1994) and the assembly of the Audi Cabriolet, three independent model series were produced at the plant for the first time.