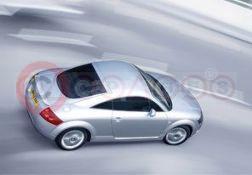 September 1st sees the arrival of the latest car number plate change, which comes at a time when Audi is offering its widest ever choice across its eight model ranges. Seven new additions to the UK line-up during this summer alone will reinforce the marque's reputation for technical innovation, design flair and unparalleled quality.

Sophisticated FSI direct injection petrol engines make their debuts in September in the recently revised A2 compact and the A4 saloon and Avant, while updated petrol and TDI units have been adopted by the A4 and A6. The A4 Cabriolet also becomes the first convertible to offer the option of a smooth and refined V6 diesel engine.

Equally importantly, the A6 range is, of course, now headed by a remarkable new super car - the 450bhp V8 RS 6 quattro - the most powerful Audi road car ever built. V8 power is also now imminent for the rugged allroad quattro.

The new A2 1.6 FSI features a new four-cylinder, 1.6-litre petrol engine directly fuel injected by a new FSI injection system derived from the Audi Le Mans racing cars. It delivers 110bhp, and enables a 0-62mph time of 9.8 seconds and a top speed of 126mph. Equally impressively, it delivers this significant performance advantage over the A2 1.4 while at the same time bettering its fuel consumption and CO2 emission figures. The A2 1.6 FSI can cover up to 47.9 miles per gallon (combined cycle), and emits 142g/km of CO2 (A2 1.4: 75bhp/46.3mpg/144g/km), ensuring that it remains with its 1.4 counterparts in the lowest taxation bracket for business users (15 per cent).

Multi-fuel capability: The FSI engine is designed to run highly efficiently on 95 RON unleaded and 97 RON super unleaded fuels, but for ultimate 'lean burn' performance, sulphur-free or ultra-low sulphur fuels are recommended. These fuels will become more widely available in the UK from the end of this year, and will attract government duty incentives to encourage their production and use*, further increasing the cost-cutting potential for FSI-equipped cars. Revised range: The new A2 1.6 FSI heads up a recently revised A2 model line-up, which also includes four-cylinder 1.4-litre petrol models and three-cylinder 1.4-litre TDI diesels, both offering 75bhp and available in standard, SE and Sport trim levels.

Among the updates is a new 42-litre fuel tank (up from 34 litres), giving an increase in range between fuel stops of over 20 per cent.

A new Sport option package is now available for three and five-door versions of the perennially popular A3 hatchback, replacing the original Sport specification offered since launch. The package can be allied to all petrol and TDI models (with the exception of the S3 quattro), and includes:

The new Audi A4 2.0 FSI can be ordered now for £19,565 OTR in saloon form or £20,695 OTR as an Avant. Positioned between the continuing 130bhp 2.0 model and the revised 163bhp 1.8 T, the newcomer strikes an even finer balance between performance, fuel economy and emissions than both of the above. The traditional rules dictating that an increase in power must go hand-in-hand with a downturn in economy, or vice versa, do not apply here.

With 150bhp and 200Nm of torque, the FSI saloon can reach 62mph from rest in 9.6 seconds and continue to a 135mph maximum speed, yet at the same time is capable of covering just under 40 miles per gallon of petrol (combined cycle).

In the interest of the environment, and UK company car drivers, the control of emissions has been considered just as carefully in the design of this engine as the optimisation of power and fuel consumption. An under-bonnet three-way converter behind the manifold and a NOx storage-type converter under the floor-pan help to achieve an impressively low CO2 output of 170g/km (A4 2.0 190g/km).

Fuel choice: For the best possible engine efficiency, and therefore lowest fuel consumption, ultra- low sulphur or sulphur-free fuel is recommended for use in Audi FSI-powered models. However, the new engines are also designed to run on 98RON super unleaded or 95RON unleaded with virtually no losses in performance or economy.

The only convertible diesel model available in Britain will be powered by a recently revised, 163bhp version of the turbo-charged, 2.5-litre six-cylinder engine (previously 155bhp). In six-speed manual form it will be capable of accelerating to 62mph from rest in 9.9 seconds, reaching a maximum speed of 140mph and covering just over 39mpg (combined cycle), while emitting an impressively low 194g/km of CO2 (2.4 V6 235g/km).

Such is the demand for the petrol-powered 2.4 V6 and 3.0 V6 versions of the A4 Cabriolet that the original UK allocation for 2002 was sold long before the car's July 1st on sale date. To reduce the delivery lead times for cars ordered now (depending on specification), Audi UK has managed to secure extra right-hand-drive production capacity for this year.

From the 180bhp Coupé to the 225bhp Roadster, all of the exclusively four-wheel-driven Audi TT models are now equipped with larger 18-inch, nine spoke alloy wheels with 225/40 ZR18 tyres and sports suspension which has been lowered further compared with the original car. New titanium headlamp surrounds also embellish the unmistakable TT front view in 225bhp Coupé and Roadster models.

In addition, the range of standard metallic and pearl effect paints which were originally available at extra cost are now free of charge, while the special order colours Avus Silver and Misano Red have been reduced to £445. Other special order colours remain at their original price of £1,030.

Inside, two new special order colours - silver and red - are now available for the standard leather upholstery at an extra cost of £275.

The 2002 Audi A6/S6 quattro/RS 6 quattro Recent changes to the extensive range of A6 saloon and Avant models include the addition of a new 163bhp version of the 2.5 V6 TDI engine (as fitted to the A4), the introduction of a revised Sport specification package and the arrival of the first right-hand-drive versions of the potent RS 6 quattro saloon and Avant. TDI Upgrade:

The updated 2.5 TDI engine delivers 163bhp (previously 155bhp) and an impressive 310Nm of torque from just 1,400rpm, enabling a 0-62mph time of 9.3 seconds (Avant 9.5 seconds), a top speed of 137mph and combined fuel consumption of 40.9mpg. CO2 output is an impressively low 186g/km for both saloon and Avant, benefitting business users.

Following a number of cosmetic changes, Sport versions of the Audi A6 saloon and Avant now make a stronger visual impact to emphasise their more dynamic bias.

All four and six-cylinder A6 Sport models are given a more purposeful look by new 17-inch, nine-spoke alloy wheels (except 4.2 quattro versions), and revisions to the suspension which lower it by an additional 20mm compared with the existing Sport set-up (except 2.0 and Avant 4.2 quattro models). Body-coloured bumpers and sills are also unique to the Sport specification.

Inside, the theme is continued by sports front seats with electric lumbar support adjustment and a sports steering wheel (now with steering wheel-mounted tiptronic gear shift controls in the 4.2 quattro) and gear knob.

Powered by a 4.2-litre V8 engine with 340bhp, the S6 quattro can accelerate to 62mph in 6.7 seconds and continue, where permissible, to an electronically governed 155mph maximum speed.

New Audi RS 6 quattro touches down in Britain At the very top of the accomplished, 26 model A6 range are the world's most rapid production saloon and estate models - the Audi RS 6 quattro and RS 6 Avant quattro. Underplaying their super-car rivalling performance and exceptional, all-encompassing specification, the remarkable pair will cost £57,700 OTR and £58,800 OTR respectively.

Powered by a twin-turbocharged 4.2-litre V8 petrol engine with 450bhp, refined by a new adaptive Dynamic Ride Control system and safely contained by quattro four-wheel-drive, the new Audi RS 6 quattro will combine rapidity with responsibility. The 0-62mph sprint can be covered in just 4.7 seconds, and 124mph can be achieved in an even more impressive 17.6 seconds (Avant 17.8 seconds). Top speed is electronically limited to 155mph.

The only high performance saloon and estate models in their class to offer the major safety advantage of quattro four-wheel-drive have entered new realms of ride comfort and handling composure thanks to Dynamic Ride Control. The electronically governed, mechanical damping system monitors road conditions and cornering forces and continually adjusts the suspension characteristics to maintain exceptional balance in all situations, whilst maintaining a supple ride.

The Audi RS 6 quattro will not be supply capped and production will be increased if demand proves to be greater than anticipated following the September on-sale date.

Currently powered by either the 180bhp 2.5 TDI V6 engine or the 250bhp, 2.7-litre V6 biturbo, the allroad quattro will also be available early in 2003 with a development of the 4.2-litre V8 engine delivering 300bhp. This will enable it to accelerate to 62mph from rest in 7.2 seconds and reach a 149mph maximum speed.

Equipped with all the key features of a serious off-roader, the allroad quattro offers an impressive maximum ground clearance of 208mm, as well as a choice of three transmission systems including, uniquely in this class, low ratio for optimum control over rough terrain.

New colour schemes for 2002: 18 new special order colours are now available for the allroad quattro, ranging from Amulet Red to the vivid Nogaro Blue used with dramatic effect in the S4 quattro and RS 4 quattro. All will be available at an extra cost of £1,000.

Audi A3 Good sport: All petrol and TDI versions of the Audi A3 hatchback (except S3 quattro) will be available in September with a new Sport specification which includes 17-inch 9-spoke alloy wheels, part leather upholstery and a wider track (for some models). OTR prices range from £15,590 for the A3 1.6 Sport three-door to £21,565 for the A3 1.8 T quattro Sport five-door.

Fuelling innovation: A new 2.0-litre unit incorporating sophisticated new FSI direct petrol injection technology is one of the changes to the Audi A4 engine range for September. The new engine offers the best of all worlds, bringing increased power, reduced fuel consumption and emissions and improved performance. Prices for the new A4 2.0 FSI start at £19,565 OTR.

Diesel driven forwards: The Audi A6 saloon and Avant are now fitted with a revised version of the acclaimed 2.5-litre V6 TDI engine delivering 163bhp. All models (except the S quattros and RS quattros) are also available with a new Sport equipment package. On the road prices for the new A6 V6 TDI saloon and Avant are unchanged at £24,155 and £25,555. A6 OTR prices range from £20,500 to £47,520.