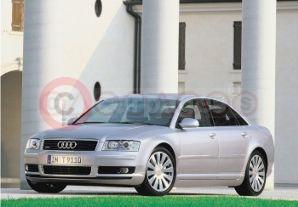 The last ever original, and still unique, aluminium-bodied A8 luxury saloon has just left the production line at the state-of-the-art Audi Aluminium Centre in Neckarsulm, Germany. The multi-million Euro facility has now turned its attention to the new Audi A8, which will make its World debut at the 2002 Paris Motor Show, combining ultramodern technology with innate simplicity and traditional luxury.

Due at British Audi Centres in the spring of 2003, the new Audi A8 will be notable not only for its lightweight aluminium construction and quattro four-wheel-drive, but also for its sophisticated driver adjustable air suspension and the futuristic computerised Multi Media Interface which controls many of its functions.

A full range of petrol and TDI engines will be gradually phased in for British A8 models. Initially, power will be provided by 3.7-litre and 4.2-litre V8 petrol units, delivering 280bhp and 335bhp through a new six-speed Tiptronic automatic transmission. These highly refined engines will be shown in their best possible light, thanks to the significant bodyshell weight savings afforded by the latest evolution of the aluminium Audi Space Frame (ASF) and the ultra light aluminium panels that are mounted upon it.

Ground breaking manufacturing techniques perfected in the production of the first A8 and the more recent A2 have ensured that the new aluminium space frame is even more rigid and protective, and at the same time lighter, than its predecessor. This translates into maximised performance, minimised fuel consumption and emissions and a feeling of agility rarely achievable in a luxury or D-Segment car.

This agility is also attributable to the lightweight aluminium running gear, which incorporates air suspension with continuously variable damper settings capable of adapting to suit the prevailing road conditions. Four predetermined spring and damper settings can also be selected by the driver using the Multi Media Interface control.

MMI also brings together the user interfaces of other major functions such as audio, DVD satellite navigation, television and telephone at one central location, and uses the same operating principles to control them all. As a result, using the retractable screen and its logically positioned rotary and push button function controls quickly becomes second nature.

Among the many other innovations is an ‘Advanced Key’ feature, which enables the driver to lock and unlock the vehicle, and start the engine, without removing the key from his or her bag or pocket. An electronic pulse generator within the ignition key communicates with a proximity sensor in the door of the A8, and once its signal has been accepted the doors are unlocked and the ignition activated. The engine can then be started at the touch of a button.

This starter button also incorporates a sensor capable of storing a driver’s fingerprint, and then recognising this unique ‘signature’ every time the vehicle is started. This means that the driver’s preferred settings for everything from the seats to the radio volume can be stored along with the fingerprint, and then automatically reset to the driver’s requirements as soon as he or she touches the button.

On the move, new ‘adaptive light’ cornering lights work in conjunction with the xenon plus gas discharge headlamps. These additional lighting tubes are positioned between the dipped and full beam headlights, and either the left or right unit is activated depending on a variety of factors such as road speed, the steering angle and the turn indicator which is operated. The forthcoming corner or turn is then pinpointed by a secondary beam of light, and can be negotiated more easily.

An evolution of the familiar cruise control system - adaptive cruise control - will also be available. This radar-assisted system is operated via the MMI, automatically regulating speed to maintain a specified distance from the vehicle in front. Four separate distances can be preset to suit traffic flow, density and speed.

UK prices and standard specification for the new Audi A8 range have yet to be decided, and will be announced nearer to the UK launch in spring 2003.