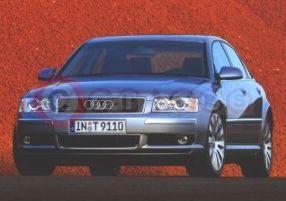 The new Audi A8 is about to make its entrance: with its compelling handling, pioneering technology and exclusive design and equipment, this saloon redefines the notion of sports appeal in the luxury segment.

The new Audi A8 combines technical characteristics that set it clearly apart from its class competitors. As the brand's flagship model, it uncompromisingly demonstrates the identity of the next generation of Audi models and embodies Audi's claim of "Vorsprung durch Technik": sporting character and clear design, innovative technology and superlative quality.

There were four priority areas in the development of the new Audi A8: design, lightweight construction, dynamism and electronics. Four areas that are linked by a single idea: the idea of ease. In other words, ease in the sense of design harmony, ease of acceleration, the ease with which it can be handled - the driver of an A8 does not have the impression of handling a large saloon car - and, finally, ease of operation.

Its design gives visual expression to the unique character of the new A8. Expansive, strikingly arched surfaces are framed by precisely plotted lines.

The silhouette of flat front and short body overhangs, plus the highly contoured rear end, provides a clear indication of its dynamic potential.

Two powerful, responsive V8 engines, a 4.2 litre version with an output of 246 kW (335 bhp) and a 3.7 litre version developing 206 kW (280 bhp), will be available at the market launch in autumn 2002. One new feature in the A8 is the 6-speed automatic transmission with tiptronic function, which constantly assures an optimum transition between the various speed stages. As an option, it is also possible to change gear via shift paddles mounted on the steering wheel; the ergonomic advantages of this concept have already been demonstrated on Audi's Le Mans champion model, the R8.

In conjunction with the low weight of the aluminium body built using the Audi Space Frame (ASF) principle, the engine and transmission turn in an excellent performance coupled with exemplary economy.

The air suspension for the new A8's aluminium running gear is a unique standard feature, providing an optimum characteristic in every driving situation.

The driver can choose between three predefined settings, for a suspension characteristic ranging from overtly sporty to ultra-comfortable.

The A8 is the ultimate driver's car not simply by virtue of its outstanding driving characteristics. In the luxurious interior, the driver will find an entirely new, pioneering approach to interacting with the vehicle's technology and its communication systems, in the guise of the Multi Media Interface (MMI).

Ingenious ergonomics and an intrinsically logical and therefore self-evident operating concept make this car uniquely easy to operate, allowing the driver to concentrate on the traffic - and on the uncommon pleasure of being behind the wheel of the new A8.

Its predecessor, of which over 100,000 were built, was likewise unquestionably a car meant for drivers: when it was first launched in 1994, the A8 was the first production saloon to have an aluminium body and it came to epitomise a new way of doing things in the luxury class. The low weight of the ASF Audi Space Frame brought a significant gain in operating dynamics, while reversing the upward spiral of body weight. At the same time, Audi set a new benchmark for dynamic handling in the luxury car class thanks to its quattro drive.

Such characteristics and such a success story set a very high standard for its successor. The latter nevertheless sets out with the clear objective of building on its predecessor's strengths and doing things even better in the areas in which that model excelled.

The new Audi A8