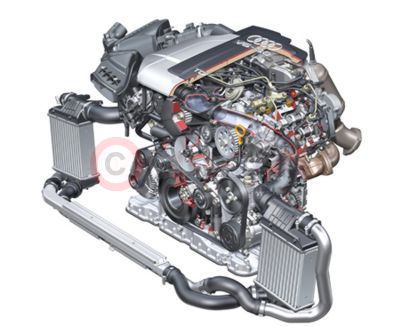 The new Audi A6 Avant will be launched with a choice of no fewer than five engines installed longitudinally - three petrol and two TDI power units. All these engines share a level of power and torque that is outstanding in this segment of the market:

All engines comply with the limits of the EU4 emission standard. A diesel particulate filter can in addition be ordered as an option for the TDI engines.

The six and eight-cylinder power units come from Audi's new V-engine family. Their highlights in design and construction are the 90° cylinder angle and a distance of 90 millimetres between the cylinders, compact dimensions, maintenance-free camshaft drive via a chain and low-friction roller-arm valve drive.

In addition to the 3.0 TDI, the A6 Avant is starting out with a further representative of the latest V6 TDI engine generation with common rail system and piezo inline injectors: the 2.7 TDI.

Like its big brother, which has a capacity of three litres, it makes use of the latest injection technology and consequently already undercuts the demanding EU4 emission limits, which will not take effect until 2006, even without a diesel particulate filter.

A new crankshaft with the stroke reduced by 8.3 millimetres, new connecting rods and different pistons result in an overall swept volume of 2,698 cm3. This engine’s key performance data are a power output of 132 kW (180 bhp) in a speed range of between 3,300 and 4,250 rpm and a peak torque of 380 Nm which is available from 1,400 rpm and remains at this high level all the way up to 3,300 rpm.

The result is a spontaneous response and tremendous pulling power even from the lowest revs. The 100 km/h mark is passed after just 8.3 seconds on the way up to a top speed of 225 km/h. But it is the mid-range sprints that are the outstanding discipline of this new high-performance engine.

The pioneering common rail injection system with piezo inline injectors permits up to five separate amounts of fuel to be injected per working cycle, at an injection pressure of 1600 bar. Piezo technology enables considerably smaller and more precisely metered injection quantities. At the same time, the system responds twice as fast as conventional solenoid-valve injectors thanks to the higher speed of the injector needle. This effect is particularly important in maintaining brief intervals and high precision between the separate multiple injection processes, of which there may be up to five.

These measures result not only in high performance and an enormous torque plateau, but also in low fuel consumption (7.0 litres per 100 kilometres), extremely low emissions and outstanding acoustics. It is especially in this latter area that the new engine undoubtedly represents the new benchmark in this class.