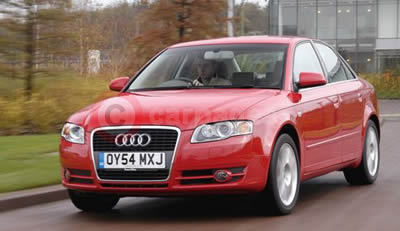 Audi senior executives believe, starting from 2005, the company has a two year window of opportunity to close the gap and overall their great German rivals BMW and Mercedes-Benz in the UK and Europe for new passenger car sales.

Speaking at this week’s press introduction of the new Audi A4 Saloon and Avant (estate) range, which goes on sale from the beginning of January 2005, Jon Zammett, Head of Public Relations for Audi UK said, "With the introduction of our new A4 models, our best selling range and the introduction of more new models such as the Q7 seven seat SUV, we should now overall our fellow German competitors, but of course nothing is ever certain".

"In sectors where we choose to compete with BMW and Mercedes our sales are on a par with them but overall without an SUV or a three-door A4, we do not have such a wide range of vehicles to compete with".

Zammett said, "The UK is now the biggest export market for Audi in the world having overtaken the USA earlier this year and we could overtake Mercedes before the end of this year but we are not indulging in any tactical selling. Our growth for the brand will take place as we introduce new models in sectors where we do not currently compete".

"This year Audi expect to sell between 750,000 and 800,000 new vehicles worldwide but in two years time with the Q7 and other new and additional models added to our line-up it is potentially possible for us to reach the one million mark. In the UK once Q7 is introduced early in 2006 this model alone will add up to 10,000 sales to our annual overall volume" said Zammett.

Q7 is the seven-seat SUV production version of the Audi Pikes Peak concept 4x4 vehicle first shown at Detroit and Geneva shows in 2003.

In addition to the Q7, which is expected to cost a shade under £40,000, Audi will be introducing their new A6 Avant estate models in March 2005, followed by an A4 Drophead, the high performance 425bhp RS 4 Saloon and later RS 4 Avant versions. A mid engine sports car is scheduled for 2006-2007.

Of the 800,000 sales worldwide expected in 2004, European countries will take up half a million off these. Out of the 18 countries which make up the Western European market, currently Audi lead their German rivals for sales in eight countries, Mercedes also lead in eight countries whilst BMW head the list in two countries. Western European sales for the first ten months of this year show Mercedes with 577,786 registrations, BMW with 473,556 and Audi with 464,628. Only BMW is showing an increase over 2003 sales at the same point of the year.

The redesigned new Audi A4 range of Saloon and Avant models are available for customers to order now but deliveries will start in January with certain models expected to arrive in February. Twenty-four derivatives make up the range with nine engine options, four of them new. Audi say all body panels, except the roof, are new for the revised A4.

Both A4 Saloon and Avant models have Quattro derivatives and 2005 is the 25th anniversary of Audi Quattro.

Audi UK say they will sell around 30,000 new A4 models in the UK next year making it marginally their best selling model ahead of the A3 series.

The A4 range will sell alongside the new BMW 3-Series, Mercedes C-Class and Jaguar X-Type at the premium end of the upper-medium car sector. According to Audi this sector accounts for nearly 300,000 UK new car sales each year. Diesel models have increased their share in the last eight years by 115 per cent to account for just over half of all segment sales.