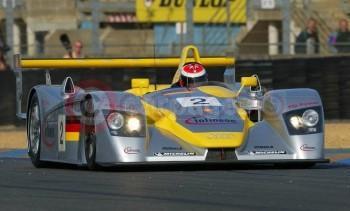 Audi has laid the foundations for recording a third consecutive triumph in the Le Mans 24 Hours by blitzing the opposition in warm-up trials for the annual French marathon.

Capello ultimately beat Herbert's quickest lap with just 10 minutes remaining when the Italian set a 3mins 30.296secs - an average speed of over 135mph. His time was a staggering two seconds quicker than the second fastest car and a massive 2.5secs quicker than the R8s managed at the official test day last year - despite the track being slightly longer due to the modifications between the Dunlop Bridge and the Esses.

A 52-car entry contested the day-long test in overcast and cool conditions, the only opportunity to race around the circuit made up of public roads before this year's event on 15-16 June.