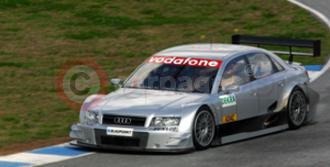 As new Audi A4 S line models take to British roads featuring the most performance-oriented A4 specification to date, the sporting theme is being taken to even greater extremes by the mighty 460PS V8 A4 DTM racer – a hotly tipped contender in the forthcoming German Touring Car Masters race series.

With a 4.0-litre, eight-cylinder petrol engine channelling approximately 460PS to the rear wheels, the new A4 DTM is spiritual successor to the peerless A4 quattro racer, which ran from 1995 to 1999. In that time it became the World’s most successful super touring car with over 200 race wins and 20 championship titles. It marks the return of works Audi teams to the hard fought German Touring Car Masters (DTM).

Developed by Audi Sport in Ingolstadt and Neckarsulm, Germany, the six Audi A4 DTM cars will be campaigned throughout the series of ten 160km-long races at speeds of up to 180mph. Team drivers include multiple Le Mans winners Frank Biela, Emanuele Pirro and Tom Kristensen, along with other famous racing names such as Christian Abt, Mattias Ekström and Martin Tomczyk.

After recently completing over 1,000 kilometres of circuit-based testing in Jerez, Spain, the A4 DTM is ready to compete in its debut race at Hockenheim on April 18.

The range of road-going sporting A4 models is also in its best ever shape. It features a new look for Sport versions courtesy of Audi high performance subsidiary quattro GmbH, new and even more visually striking 1.8 T S line models and, at the head of the line-up, a new S4 quattro Cabriolet to complement S4 quattro Saloon and Avant models.