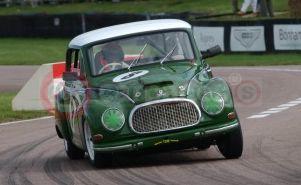 The Pirro/Hesse DKW qualified 16th on the 28-car grid with the Herbert/Smail DKW 26th courtesy of Emanuele and Johnny - both driving their respective "Deeks" for the first time during the 30-minute qualifying session.

In the race, Herbert survived an assault from the Lincoln Continental moments after the start but co-driver Smail was less fortunate when he was unceremoniously nudged off the track while being lapped on the penultimate lap when placed a creditable 18th. Meanwhile the enthusiastic Pirro made an unscheduled pit-stop to remove oil from his windscreen while Hesse recovered to take the chequered flag in 15th place. The distinctively sounding DKWs featured the smallest engines in the race and were up against cars with over five times the engine capacity.

Clark made his car racing début behind the wheel of a DKW "Sonderklasse" in 1956. Clark, one of the world’s greatest single-seater drivers, drove the German car at Crimond, located between Peterhead and Fraserburgh, and like Herbert, retired his DKW during the race.

DKW was founded in 1907 by Dane Jorgen Skafte Rasmussen and amalgamated in 1932 with Audi, Horch and Wanderer, to form Auto Union. In 1969, NSU joined the "family" which is known today as Audi.

In the early days, the DKW company produced machinery and metal goods before embarking on car accessories in 1912 and ultimately a steam-driven motor vehicle in 1916. The DKW name was originally derived from the German words for "steam driven vehicle" (Dampfkraftwagen) but was also used by Rasmussen for subsequent engine projects: Des Knaben Wunsch (a boy’s wish) and Das kleine Wunder (the small miracle) which led to DKW manufacturing motorcycles in the 1920s. Indeed, by 1928 DKW was the largest motorcycle manufacturer in the world.

In 1923, a 170cc, 2.5bhp single-cylinder DKW engine appeared in a "baby car" designed by Rudolf Slaby at the Berlin Motor Show while the first actual DKW car went on show four years later at the Leipzig Spring Fair.

A small DKW "competitions department" was established in 1925, initially concentrating on its motorcycle programme but by 1929, one for cars was formed. Its "Sonderklasse" (special class) models went on to perform well in motorsport. Walter Schluter even won the 1954 European Rally Championship while during a 10-year period from the mid-1950s, DKW achieved 100 championship titles winning over 150 races.