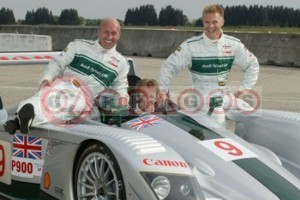 Audi Sport UK attempts to lay the foundations for a fourth consecutive Le Mans 24 Hour race victory for the German car manufacturer on Sunday (4 May).

1996 British Touring Car Champion Frank Biela, ex-Formula One driver Mika Salo, of Finland, and Britain’s Perry McCarthy who competed in the Grand Prix category in 1992, spearheads the British-based Audi team’s quest for honours in the annual round-the-clock marathon on 14-15 June.

The Audi Sport UK "customer" Audi R8 is one of 56-cars the organiser of the annual race (ACO) has "invited" to participate in two, four-hour test sessions.

The eight-hour trials (0900-1300 and 1400-1800) around the 8.482-mile track, located approximately 100 miles south-west of Paris, presents the competitors with their one and only opportunity in advance of the race on 14-15 June to "fine-tune" their cars to the demanding, high-speed course consisting mainly of closed public roads.

The 200mph "open top" sports racecar is powered by a 3.6-litre, V8 twin-turbo Audi engine, restricted in power to 550bhp. It will ultimately need to complete around 3,000 miles at an average speed of over 130mph in the race to be in contention for honours.

Frank Biela: "I’ll have my first drive in the Audi Sport UK R8 four days before the Le Mans pre-test at Snetterton (30 April). We’ll arrive at Le Mans with an identical set-up as Audi Sport had there last year – it seemed to work well! It will be difficult in that the Audi will be a new proposition to my team-mates but so long as we are all equally happy with the set-up, everything should be good for the race week itself."

Perry McCarthy: "The test weekend allows us to ultimately compare ourselves directly to the performance of our immediate competition. Although our Audi R8 has an impeccable track record at Le Mans, we as a team need to be satisfied that we fully understand how we can set the car up, both mechanically and aerodynamically, to place it in its best performance envelope."

Mika Salo: "I have never driven at Le Mans and have only once visited the 24 Hour race - for fun in 1989. But despite this, I do not believe the track will pose a problem for me. I am able to learn track layouts very quickly and having driven the Audi R8 at Sebring I’m more than happy."