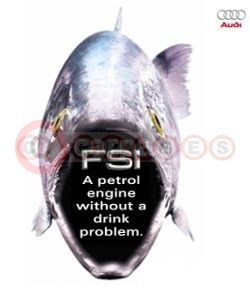 ‘Vorsprung durch Technik’ from Audi is again being combined with unique advertising in a new campaign which airs on television and in cinemas nation-wide from this week. Employing groundbreaking animation techniques, the new campaign highlights the fact that the Audi A4 2.0 FSI is not the type to ‘drink like a fish’.

One of the most sought-after executive cars on the market, the new Audi A4 FSI offers the best of both worlds. Its 2.0-litre petrol engine combines the economy of a diesel, offering the potential to cover up to 52.3 miles per gallon, with the response and refinement befitting a 150bhp petrol unit – courtesy of a highly advanced new direct fuel injection system (FSI).

Filmed in a bustling city, the new ad shows the A4 2.0 FSI accelerating through traffic while less efficient conventional petrol cars – denoted by 30 guzzling car-sized animated fish – struggle for breath. The critical message is shown when the fuel-efficient A4 drives swiftly past a petrol station with a long queue of ‘fish’ either eagerly waiting to fill up or greedily drinking fuel from the nozzles.

The new ad is the brainchild of advertising agency Bartle Bogle Hegarty. It was animated by the agency behind the popular ‘Walking with Dinosaurs’ television series, and directed by renowned director Frank Budgen, winner of four Gold Lion Awards at last year’s Cannes International Advertising Festival.

Gary Savage, Audi UK’s head of marketing, commented: "Audi developed its FSI technology from its Le Mans winning racing cars to achieve more power as well as better fuel economy. This is yet another demonstration of ‘Vorsprung durch Technik’ and the advanced creativity and intriguing animation used in the ad are certain to achieve stand out and grab attention".

The 40-second ad hit British TV screens on 17 February 2003, and is due to run until early April. The campaign has also been carried over to collar ads on petrol pump nozzles.