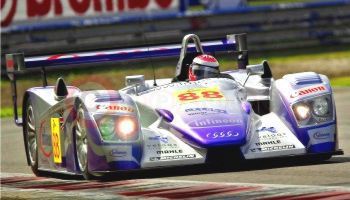 Audi UK’s all-conquering motor racing team is to roar into Birmingham for The Sunday Times Motor Show Live Press Day (May 25) - less than a month before bidding for glory in one of the world’s toughest, most gruelling races.

Former Grand Prix drivers Johnny Herbert and Allan McNish, as well as fellow "Brits" Jamie Davies and 2003 Le Mans winner Guy Smith, will be making special appearances at the show on Press Day only in advance of this year’s Le Mans 24 Hours (12-13 June). Accompanying them will be a pair of the team’s world-dominating Audi R8 sportscars.

Having won its maiden motor race, Northamptonshire-based Audi Sport UK Team Veloqx scored a magnificent one-two in the opening round of the Le Mans Endurance Series at Monza (9 May) – and top this European-based sportscar endurance championship. Its first two results enable the team to justly claim to be the world’s top sports car team of the 2004 season.

Herbert/Davies beat the similar Veloqx Audi of McNish/Kaffer by a mere 0.661secs after five hours of cut-and-thrust racing around the Italian Monza track - a 620-mile event pundits have hailed as one of the most exciting sportscar races in recent years.

The Audi R8 sportscar, featuring FSI fuel-saving technology first pioneered on the race tracks but now available in the A2, A3, A4 and new A6 ranges, has scored an amazing 41 race wins from just 50 race starts worldwide over the past five years.

The Sunday Times Motor Show Live runs from May 27 to June 6 at the NEC Birmingham, and will offer British Audi devotees their first chance to get behind the wheel of the all-new A6 Saloon.