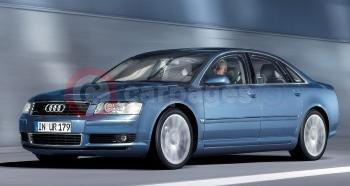 Flagship Audi adopts ultra-competitive new V6 TDI engine as A8 range is awarded five stars for security in Thatcham tests The world’s first large luxury diesel saloon to meet 2006 EU4 emission regulations - the new A8 3.0 TDi quattro - is to take on traditional petrol-engined rivals in the executive segment by setting impressive new benchmarks for power and performance. The first D-segment 6-cylinder diesel from Audi is to join the highly acclaimed 4.0-litre, V8 TDI A8 in April, priced from £47,380 OTR.

Featuring common rail injection technology for the first time in an Audi V6 TDI, the turbo charged 3.0-litre unit ensures that the A8 3.0 TDI quattro stands scrutiny against petrol-engined rivals in every respect, yet does so with exceptional 33.6mpg capability.

A class-leading 233PS is available at 4,000 rpm, along with a no less impressive maximum torque figure of 450Nm from just 1,400rpm, and this impressive output can be exploited more fully than would normally be possible in a large luxury saloon thanks to the weight savings made by Audi Space Frame (ASF) aluminium body construction. This results in an all-in weight reduction of up to 145kg compared with key German steel-bodied rivals, giving the new A8 3.0 TDI quattro the best power-to-weight ratio in its class, despite the fact that it is unique in offering the major benefit of permanent four-wheel-drive as standard.

With pared back weight and unparalleled power in its favour, the A8 3.0 TDI quattro with six-speed tiptronic transmission outperforms all its six cylinder diesel peers, accelerating from 0-62mph in 7.8 seconds and reaching a maximum speed of 151mph. Only the unusually slow descent of the fuel gauge needle reminds the driver what makes this A8 tick – up to 33.6mpg is achievable on the combined cycle, giving a range of 665 miles on a single tank of diesel.

The A8 3.0 TDI quattro also sets a new standard as the first and only diesel car in the large luxury class to outperform the tough EU4 exhaust emission limits that will apply from 2006. Consequently, it will reduce running costs for business users by eliminating the 3 per cent diesel tax premium for UK drivers.

Coinciding with the launch of the new A8 3.0 TDI quattro is the welcome news that the A8 range as a whole has been awarded five stars by the British insurance industry’s Thatcham research centre for ‘theft of’ and ‘theft from’ security. The A8 is the first of the luxury saloons from the ‘big three’ German premium brands to merit this top rating, bearing testament yet again to the exceptional attention to detail that has been paid to this flagship Audi.