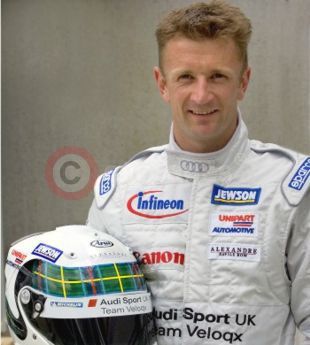 Dumfries-born McNish, 35 next month, has been selected to drive the new generation A4 DTM car along with 2004 DTM champion Mattias Ekström (Sweden), Tom Kristensen (Denmark) and Martin Tomczyk (Germany). Meanwhile Christian Abt (Germany), Rinaldo Capello (Italy), Pierre Kaffer (Germany) and Frank Stippler (Germany) will race the current 2004 A4 DTM model which was confirmed at the Essen Motor Show in Germany today (25 November).

McNish commented: "The DTM has got a very high pedigree of drivers, some from Formula One like Mika, plus some unfamiliar faces for me like Britain’s Gary Paffett but no matter anyone’s background, there is not one person racing who wants to finish second. DTM will be new territory for me but having visited the championship finale this year I can confirm the racing is very fast and furious. I will give 100% but being a DTM ‘new boy’, I am not going to make any predictions."

"I enjoy working with Audi and their clear and decisive mentality suits me," continued McNish. "Additionally, many people from the ultra-successful Audi R8 programme are also involved in the DTM project. When I came back from F1 I wanted to return to Le Mans and Audi after driving for them in 2000. There were many reasons but the two important ones were they know how to win and we work well together."

McNish has never previously raced a modern era saloon or touring car but does not see this as a handicap. Six-times Le Mans 24 Hours race winner Tom Kristensen contested the DTM for the first time this season, scoring one win and fourth place in the final championship standings for Audi.

Allan added: "It is not going to be easy for me and I am going to have to learn the tricks of the trade but I watched Tom’s [Kristensen] progress this year coming from a similar background and he was competitive.

"I am really excited about this programme and can’t wait to start. I still get the same feeling now as when I started karting almost 25 years ago and combining that passion with hard work and effort from myself and the team I know we can be successful."

In addition to Audi’s Mattias Ekström winning the 2004 DTM Drivers’ "crown", Audi and Audi Sport Team Abt claimed the Manufacturers’ and Teams’ titles respectively in a year which saw Audi running two "factory" teams for its 460-bhp A4 model. Teams Abt and Joest will again prepare the Audis in 2005.

The DTM regularly attracts over 100,000 spectators at each race and is likely to visit the Netherlands, Belgium, France and Turkey as well as Germany next season.