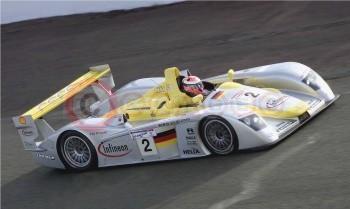 Despite a fourth puncture, Herbert briefly moved back on to the lead lap with six hours remaining when Biela lost seven minutes having his Audi's starter and battery changed.

Herbert confirmed: "The time we lost due to four punctures cost our Audi any chance we had of victory. It's a crying shame - the car itself ran faultlessly, fast and reliable throughout the 24 hours. But no one can be blamed for a tyre being punctured - you're literally in the lap of the Gods with something like that and we were the unlucky ones - fourfold!"

At the chequered flag Herbert, who physically drove for almost 11 hours in four separate stints, finished a lap down on the triumphant Biela/Kristensen/Pirro Audi. The German/Danish/Italian combination, who covered the 3,180-mile race distance at an average speed of over 132mph, become the first identical crew to ever win the legendary Le Mans race for three consecutive years since the race first ran in 1923.