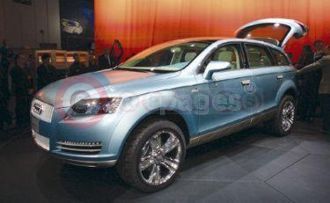 Audi has drawn on its sporting success in two of the world's most famous races to develop its latest concept car - the Pikes Peak quattro - unveiled at this week's North American International Auto Show in Detroit.

The name itself is inspired by the Pikes Peak Hill Climb Race held in the USA every June with up to 160 fearless drivers competing over a 12.4 mile course with 125 mph straights and 156 corners.

Audi has won this event three times in the past and the new concept car could tackle this gruelling course and much more. Indeed the technology used in the 500bhp engine is derived from the Le Mans winning cars of 2001 and 2002.

The Pikes Peak is described by Len Hunt, formerly Director of Audi UK and currently Vice-President of Audi North America, as three cars in one - "a high performance vehicle, a desirable sports utility and a flexible MPV."

There are currently no plans to put the Audi Pikes Peak quattro into full production, although Audi executives said they would be studying public opinion "very closely".

The design study is powered by a 4.2-litre V8, twin-turbo engine similar to the unit which powers the Audi RS 6 quattro, but with power increased to 500bhp, enabling an impressive 0-60mph acceleration time of just 4.7 seconds.