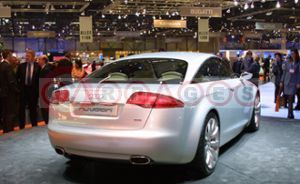 Geneva - Audi’s Nuvolari quattro concept, named after the racing driver Tazio Nuvolari, is rumoured to be the best clue yet to the shape of the next A6, due to be make its debut in September.

It is the second key concept from Audi in less than three months, following the Pikes Peak crossover study revealed at the Detroit motor show in January.

"We are aware of our brand’s heritage and will continue in evolutionary steps."

The Nuvolari is described as a "Gran Turismo for tomorrow" and uses space frame technology for its aluminium body, just like the A8, to give an excellent power-to-weight ratio. The size though is more that of the current A6.

This concept is fitted with the most powerful engine Audi has yet developed for a roadgoing vehicle – a 5.0 litre V10 bi-turbo producing 600 bhp and maximum torque of 750Nm. That’s enough to give 0-62 mph acceleration of just 4.1 seconds and a top speed governed to 155 mph.

Tazio Nuvolari was the last driver to win a grand prix in an Auto Union car, in Belgrade on September 3, 1939.