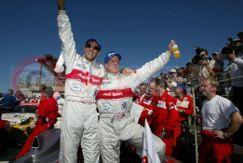 Johansson started the 165-minute race from fifth place on the 31-car grid but Herbert took over from the Swede in third place after an hour’s racing.

The “factory” Audis of Emanuele Pirro/Frank Biela and Rinaldo Capello/Tom Kristensen began the race from the front row of the grid and dominated the early stages but the second-placed Capello/Kristensen a lot of time making suspension repairs dropping them to eighth.

Herbert, who finished second in the corresponding race last year, thus inherited second and spectacularly reduced the gap to the leading Pirro/Biela Audi to 16secs with just 15 minutes remaining but took the chequered flag 25.7secs behind in front of the 50,000 crowd.

“We pitted under a full course yellow caution period which saved us a lot of time,” confirmed Herbert. “We’d suffered a handling imbalance throughout the weekend and so to finish second and close the gap in the title race on Tom is a bonus at this stage.”

The Cadillac of J J Lehto/Max Angelelli completed the top-three with the recovering Capello/Kristensen Audi just 2.9secs behind in fourth. With just two races remaining in Miami and Atlanta next month, Kristensen is three points clear of Capello with Herbert still third but now 18-points behind Kristensen and two points ahead of Biela.