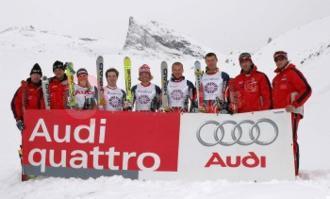 Britain’s top international ski and snowboard race teams are on the road courtesy of Audi UK. The UK importer of the German prestige car manufacturer has become the official vehicle supporter of Snowsport GB, The British Ski & Snowboard Federation, for the next three years.

Snowsport GB’s athletes and support personnel will utilise nine Audi A6 Avant quattros throughout Europe during the team’s demanding 10-month training and race season. Audi UK’s partnership with Snowsport GB, the national governing body for snowsports, extends through until the 2006 Olympic Winter Games in Turin.

Chemmy (21), enjoying her fifth season with the British Land Alpine ski team, will get an ultra fuel-efficient Audi A3 2.0 FSI for her personal use. The Twickenham-based athlete, who skies all four disciplines, recorded the best British Women’s Downhill result at World Cup level for almost 32 years when she finished ninth in Cortina d'Ampezzo, Italy, recently.

Audi UK’s David George commented: "Our main sporting interest has historically been motorsport, but skiing is an exciting and dynamic sport which also reflects Audi’s sporting credentials, and provides the perfect environment to communicate the advanced nature of our quattro technology.

"This marks a much bigger commitment than our first sponsorship association with Britain’s ski governing body for the 1999-2000 season. We’re delighted to be co-sponsors of the British Land Alpine Ski Team and excited to be part of the team’s build-up to the 2006 Winter Olympics in Turin."

Performance, reliability and safety are absolutely vital. Each Audi will cover over 20,000-miles a season and many of our routes feature severe mountain passes undertaken in a variety of winter weather conditions."