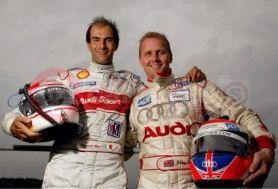 Monaco-based Herbert (38) and Pirro (40), who can boast almost 200 Formula One GPs spanning 12 years between them, will each drive a DKW "Sonderklasse" saloon car featuring an engine developing less than one-sixth of the power their fearsome Audi sportscar delivers. Walter Schluter won the 1954 European Touring Car Championship driving a DKW.

Brentwood-born Herbert, who also has a home in Oxfordshire, teams-up with Desmond Smail, from Olney in Buckinghamshire, in a 1957 DKW that is currently being imported by Audi UK from South Africa. Meanwhile reigning American Le Mans Series champion Pirro, who made history two months ago by claiming his third consecutive Le Mans 24 Hours triumph along with Frank Biela and Tom Kristensen, will co-drive German Martin Hesse’s DKW. Both DKWs compete in the 20-lap St Mary’s Trophy saloon car race, a two-driver 50-mile event.

But for now, Herbert and Pirro plus their fellow Audi sportscar drivers, prepare for the seventh round of the American Le Mans Series at Mosport on Sunday (18 Aug). The 2.459-mile Canadian circuit in Canada is one of the fastest tracks on the ALMS calendar - in stark contrast to the last two races in Washington and at Trois-Rivières.

Herbert commented: "I like Mosport. The Champion Audi was really strong there last year. We had the chance to win and despite our retirement, I enjoyed the race tremendously. I hope we can be as fast and finish this time high in the points. After all, I have to catch up the other Audi drivers."

All-Wheel-Drive To The Fore In Sweden Too

Audi In Sight Of German Championship

Second place in the latest DTM (Deutsche Tourenwagen Masters) race at the Nürburgring (04 Aug) allowed Team Abt Sportsline Audi TT-R driver Laurent Aiello to take another step towards the Driver’s "crown". Aiello, who has won four times and enjoys a 24-point advantage over reigning champion Bernd Schneider, can claim the title at the A1-Ring in Austria on 8 September.

"Clubman" Turning Back The Clock In Britain

Amateur club racer Steve Hirst, from Godalming, Surrey, is also keeping Audi’s quattro in the winner’s circle - in a seven-year-old car. The 43-year-old is racing a 1995 Audi Sport built A4 quattro "Super Tourer" in the Formula Saloon Car Championship. He recently won at Brands Hatch with a helping hand from Phil Danbury - a former Audi Sport UK technician who worked on the 1996 British Touring Car Championship winning Audi A4 quattro of Frank Biela.