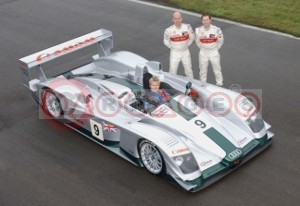 Salo (36), McCarthy (41), from Brentwood in Essex, and London-based Ulsterman Kane (29) have never raced the all-conquering Audi R8 before but none see this as a handicap in a race that will see the winning car clock up over 1,200 miles at an average speed of over 100mph - despite having to make at least 12 pit-stops for fuel, fresh tyres and driver changes.

Audi Sport UK’s drivers each had a brief run in the 2002-specification Audi R8 last month (10 Feb) before the car was shipped from Liverpool to New York and then driven down the East coast to Florida. Unofficial testing commences today (10 Mar) with practice on Wednesday and qualifying for grid positions on Thursday. Saturday’s race starts at 1530 (GMT).

"I’ve not raced a sportscar and never driven around the full Sebring track during my career but this will not be a major problem," commented Salo. "A professional motor racing driver learns a circuit very quickly and I’ve driven a variety of cars, including racing in Formula One last year, so I do not believe I will have a problem adapting to a sportscar."

McCarthy, who also raced for Audi in 1999, is relishing the prospect of driving the Audi R8. He said: "I drove an Audi on their sportscar debut at Sebring in 1999 but an electrical problem late in the 12 hour race cost us a podium position and we eventually finished fifth. The race is very interesting concerning the large difference in speeds between the fastest cars like the Audi to the smaller-engined cars so constantly fighting through the traffic can be tricky.

"Our prospects for a top result are excellent. Sebring, within Audi Sport UK’s two-race programme, is a ‘test’ for us but it’s a ‘test’ that we can win. The team’s priority is to win the Le Mans 24 hours in June but we are capable of winning at Sebring too."

Kane raced in the Sebring event last year and cannot wait to drive an Audi R8 at Sebring. Jonny remarked: "I got out of the Audi R8 after my first drive and thought ‘fantastic’! It doesn’t seem to have any vices, has a beautiful gear-shift and is basically just a very well put together sports racingcar.

"Sebring has a very bumpy track surface but the Audi ‘rides’ the bumps especially well. There is no reason why we can’t post a top result despite our inexperience in the car. I’m confident of my own ability and that of my team-mates, we’ve got a strong line-up."

The all-conquering Audi R8, featuring pioneering FSI fuel-saving technology, is today’s most successful sports racing car having won the Le Mans 24 Hours and the American Le Mans Series (ALMS) for the past three years. AUDI AG has restructured its motorsport programme for 2003 which means that the Ingolstadt-based Audi Sport department will support various "customer" teams this year - including the Arena Motorsport-run Audi Sport UK R8.

The "British" Audi, along with an R8 entered by Canon Team Infineon for Frank Biela - who actually races the Audi Sport UK car at Le Mans in place of Kane - Marco Werner and Philipp Peter plus an R8 from the Team ADT Champion Racing Florida-based outfit for Stefan Johansson, JJ Lehto and Emanuele Pirro, will be in a field of over 60 cars to start the Sebring race – the opening round of this year’s American Le Mans Series. Most cars will have three drivers who will rotate periods behind the steering wheel during the grinding 12-hour endurance event that will test man and machine under the hot Florida sun and then well into darkness.

The Audi R8 is powered by a 3.6-litre, twin-turbocharged engine while the series rules restricts its power output to around 600bhp.