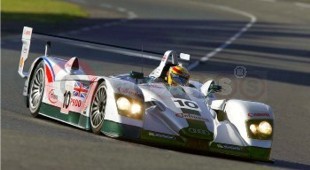 Audi aims to put its pioneering technology to good effect and score a fourth consecutive victory in the Le Mans 24 Hour race next weekend (14-15 June).

Three of the German prestige car manufacturer’s all-conquering "open-top" R8 sportscars will contest the 71st running of the annual French "classic"- a car that has dominated this category of motorsport since its 2000 début.

A combination of stunning FSI (petrol direct injection) fuel-efficiency - available in the A2 (1.6), A3 (2.0) and A4 (2.0) model range - and speed, plus tremendous reliability, has allowed the 3.6-litre engined Audis to chalk up a truly phenomenal roll-of-honour - 30 victories from 37 race starts.

Having claimed third and fourth positions in its maiden Le Mans race in 1999, the last three years has seen an Audi occupy both front row grid positions, finish the race in at least first and second positions, and also set the fastest race lap.

This year Audi bids for glory around the 8.48-mile track, consisting of mainly closed public roads, with three "customer" teams as opposed to the Audi Sport "factory" team from Germany.

Teams from Japan (Team Goh) and North America (Team ADT Champion Racing) join the British-entered Audi. It is likely, depending on weather conditions, that the winning car will need to achieve almost 3,500-miles at an average speed of over 130mph.

Triple Le Mans race winner Frank Biela: "I’m as motivated as I have always been for Le Mans and I’m very optimistic that the whole ‘package’ will enable the Audi Sport UK team to be successful. We showed that we could set competitive times in the pre-test last month. We have raced with FSI fuel-saving economy since 2001 and it makes a big difference – something that many Audi motorists can take advantage of nowadays."