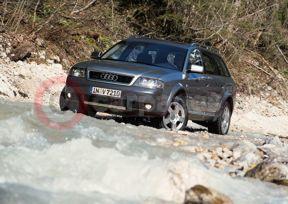 The ground breaking new Audi allroad quattro goes on sale in the UK on July 1st, bringing the best compromise yet between the comfort and refinement of a family estate car and the versatility and all-terrain capability of a serious off-roader.

The brand's first foray into the consistently popular off road sector fittingly coincides with the 20th anniversary of its famous quattro four-wheel-drive system. Taking this proven concept a stage further, the new allroad quattro is available in right-hand-drive form with either the recently announced 180bhp 2.5 TDI V6 engine, or a new 250bhp version of the 2.7-litre V6 biturbo engine from the A6 2.7 T quattro. The allroad 2.5 TDI quattro and 2.7 T quattro cost £32,550 and £36,630 respectively.

Equipped with all the key features of a serious off roader, the Audi allroad quattro offers an impressive class leading ground clearance of 208mm as well as a choice of three transmission systems. The Audi allroad quattro is unique in its class in offering low ratio transmission (on six-speed manual gearbox models) and a five-speed Tiptronic automatic gearbox as optional extras.

The allroad quattro is the first Audi to offer self levelling air suspension which is fully height adjustable. This advanced suspension system features specially designed axle assemblies with air spring struts controlled by separate height sensors. These vary the ride height at every wheel to ensure ample ground clearance on uneven 'off road' surfaces, and optimum aerodynamics when driving at high speeds.

As road speed increases, this intelligent system lowers the body in four stages, varying the allroad quattro's ground clearance from a maximum 208 millimetres to a minimum 142 millimetres. The driver can also manually override the system, selecting the various ride heights at the touch of a button - a useful feature if the surface under the wheels varies frequently.

From concept to reality

A wide track and an increased ride height also add to its visual impact, together with an exhaust system with separate, visible large-bore tailpipes to the left and right of the rear bumper and sturdy 17-inch twin-spoke alloy wheels.

Delivering exceptional refinement on and off the road, the Audi allroad quattro maintains the very high in-cabin standards made famous by the existing range of Audi cars. The well appointed cabin is quiet and comfortable making this newcomer a no compromise performer both on paved roads as well as over unmade surfaces.

Two "worlds of colour" which are unique to this model are available - Steppe Green or Grey - and the stylists have taken care to incorporate the car's rugged character into the design without affecting the elegance of the A6's famed interior. Versatility is also a plus point as usual, the allroad quattro offering comfortable seating for up to five people or a vast load area with a maximum volume of 1,590 litres.

Production of the Audi allroad quattro is taking place in the brand's Neckarsulm plant, in Bavaria which also produces the A6 Saloon and Avant, the A8 and the forthcoming advanced aluminium A2.

This is a 21-year+ news article, from our Audi archive, which dates back to the year 2000.

If in doubt check with your local Audi dealer as car prices and technical data will have changed since 2000.

Audi Allroad Images may not be UK specification cars. Colours and exterior and/or interior elements may differ from actual models.