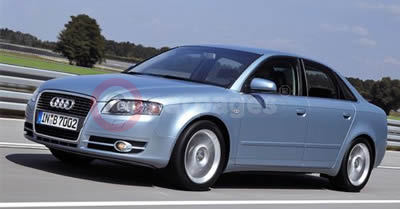 Now open for UK ordering, the latest Audi A4 models will retain significantly more of their value after three years or 60,000 miles than their prestige German rivals, according to predictions in the latest issue of CAP Monitor, the leading Industry guide to future values.

Normally quoted as the percentage of the total purchase price retained after the three- year period, the residual value figures predicted by CAP Monitor for a cross section of new A4 models are at least three per cent, and up to 7 per cent, higher than German equivalents. The A4 1.9 TDI SE, for example, is expected to achieve 42 per cent of its original purchase price, up to 7 per cent higher than key competitors, with the new 3.0 V6 TDI quattro running it close at 39 per cent, up to 6 per cent higher. In the petrol range, the 1.8 T SE Saloon is expected to hold a 3 per cent advantage over rivals at 40 per cent.

The increased desirability of the latest 26-model A4 Saloon and Avant ranges is a key factor in determining the future demand that drives residual values. This enhanced appeal has been achieved not just through re-sculpting every body panel beneath the roof section, but also by major additions to the engine range and revisions to dynamics.

New engine highlights such as the acclaimed turbo charged 2.0 T FSI and 3.2 V6 FSI and the exceptional EU4-compliant 3.0 V6 TDI have been combined with heavily revised fully independent suspension, new transmissions, a new and even more responsive steering system and upgraded braking. Complemented by a revised and even more technologically advanced cabin boasting a quality of finish that remains unparalleled in the class, these changes have brought new levels of driver appeal to the A4.

The latest A4 also makes just as much sense as ever as a business proposition for fleet drivers. The 2.0 SE, for example, attracts the lowest benefit-in-kind tax liability in the class, and when combined with the proven seven-speed multitronic automatic Continuously Variable Transmission (CVT) will cost a higher rate tax payer around £700 less annually than its nearest competitor. The 1.8 T and 1.9 TDI (130PS) models hold a similarly impressive advantage over their closest rivals, with savings of around £500 per annum possible in each case. Equally importantly.