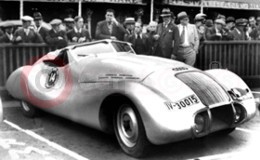 Audi Tradition – The division responsible for preserving the brand’s colourful automotive heritage - has just undertaken its most complex restoration project since the replica of the Auto Union Type C “Silver Arrow” racing car. It has breathed new life into three Wanderer “Streamline Specials” entered by Auto Union for the 4,700-kilometre Liège-Rome-Liège race in 1938 and ’39.

The trio carried off the ‘Coupe des Constructeurs’ Manufacturer’s Team prize on their second attempt at this gruelling marathon, which tested man and machine in equal measure. Teams of drivers were obliged to maintain an average speed of at least 50kph, despite the poor road conditions of the day, and often sat behind the wheel for more than 100 hours without a break as they hurtled through the Ardennes and across the Alps, stopping only to refuel.

Weighing only 900 kilograms, the aluminium-bodied roadsters were powered by a two-litre, six-cylinder engine with three carburettors derived from a new family of engines designed for Wanderer in the early 1930s by Ferdinand Porsche. With an output of 70 horsepower, they enabled the lightweight racers to reach a top speed of 160kph.

The cars were later sold, and disappeared for a time, but 65 years later their former glory has been recaptured thanks to the Audi Tradition team. Two of the sports roadsters are owned by Audi Tradition and will be on display in its Museum in Ingolstadt - the third is owned by the Belgian Audi importer D’Ieteren.

They are authentic replicas of the original cars, built by Werner Zinke GmbH, one of the leading European car restorers. The Zwönitz (Saxony) based company completed the restoration project in two years, working mainly from photographs.

The four rings of the Audi badge symbolise the brands Audi, DKW, Horch and Wanderer, which were later combined under the umbrella of Auto Union. Auto Union and NSU, which merged in 1969, made many significant contributions towards the development of the car. AUDI AG was formed from Audi NSU Auto Union AG in 1985.