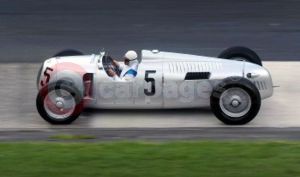 German made replica of priceless racer for your mantelpiece

Even Britain’s more extravagant festive gift hunters will be unlikely to acquire a genuine 1936 Grand Prix Auto Union – only one exists and it is absolutely priceless. But it is possible to buy a fabulously intricate scale model that, like the original, is hand made in Germany and costs a rather more down-to-earth £119.

Well over half a century after race legend Bernd Rosemeyer and the Auto Union celebrated an exceptional six Grand Prix victories in 1936 with the Type C sports car, Bavarian model makers CMC have just released a high quality reproduction of this 200mph-plus star.

The Type C was one of the first cars to bear the four-ring emblem, which signified the four unified brands Audi, DKW, Horch and Wanderer and has today become the trademark of Audi. It was one of the most successful competition cars of its era, and the one remaining example is worth many millions of pounds.

Its smaller scale, 22cm-long counterpart is every bit as meticulously engineered, featuring an incredible 1,026 parts - most of them metal - and beneath its beautifully finished body boasts an exact replica of the classic V16 engine, complete with removable spark plugs and a detailed cooling system. Mounted just ahead of the rear axle and driving the rear wheels, the incredible 16-cylinder petrol unit developed 520PS and a truly astonishing 853Nm of torque from just 2,500rpm, giving the C-Type a theoretical top speed of 211mph.

Numerous Auto Unions competed in the 1930s, from the Type A of 1934 to the Type D of 1938, and with legendary drivers such as Bernd Rosemeyer, Tazio Nuvolari and Hans Stuck on board scored 24 Grand Prix victories during the decade. There were also record-breaking Auto Unions such as the beautiful Streamliners of 1937, one of which was driven by Bernd Rosemeyer to a then unprecedented top speed of 252.47mph. To this day Audi remains synonymous with the kind of exceptional performance that made the Type C the stuff of legend.