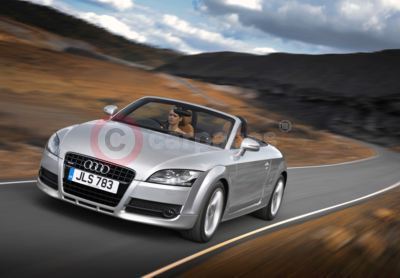 The evolution of the compact open-top sports car makes a significant leap this month as the first of the new generation Audi TT Roadsters reach UK roads, concealing radical new advances in construction and suspension technology beneath a subtle but total rework of the classic TT lines. The successor to the still sought-after original TT Roadster, launched in the UK in 2000, is now available to order with prices starting from £26,915 OTR, and will arrive with its first UK customers in April.

Like its coupé counterpart, the new TT Roadster is especially notable for its advanced hybrid Audi Space Frame (ASF) body shell blending 58 per cent aluminium and 42 per cent steel to minimise weight, maximise dynamic potential and allow full exploitation of the two powerful petrol engines available at launch. Thanks to the highly sophisticated new shell the four-cylinder version weighs just 1,295kg unladen, and body rigidity has increased by 120 per cent.

To avoid negating the weight saving made possible by the new construction technology, the new TT Roadster retains a cloth hood which is electro-hydraulically powered in both versions. A powered mesh wind deflector is also fitted as standard to UK TT Roadster models to streamline airflow through the cabin and minimise buffeting.

Incorporating a heated glass rear window, the new soft top is both lighter than before through the use of a new steel and aluminium support framework, and even more insulating thanks to an additional layer of soundproofing. Operation is now completely ‘hands-free’, with no need to attach or detach the hood to or from the windscreen rail, and the full opening or closing process takes place in just 12 seconds, and can be carried out at speeds of up to 19mph. The soft top also stows even more neatly and space efficiently than before thanks to a new Z-fold system which stacks the rigid front section of the roof on top of the cloth to form a cover that sits flush with the body and eliminates the need for a tonneau.

The new generation TT Roadster will be powered by either the 2.0-litre Turbo FSI petrol engine with 200PS or the 3.2-litre V6 petrol unit with 250PS. In common with the Coupé, 2.0 T FSI versions are front-wheel-driven, and the 3.2-litre models distribute their power via the acclaimed quattro four-wheel-drive system. Six-speed manual transmission is a standard feature of both versions, with the S tronic twin-clutch automatic transmission (formerly known as DSG) available as an option costing £1,400.

Underpinning the latest Roadster is a new suspension configuration incorporating a multi-link set-up at the rear for optimum composure at speed. Helped by its wider track, and by new electromechanical speed-sensitive steering and a new high performance braking system, the advanced chassis permits dramatic improvements in the TT Roadster’s handling adjustability and overall agility compared with the outgoing model, combined with noticeable gains in ride comfort.

To amplify these major improvements even further, a futuristic magnetic ride system is also available as an optional extra for both TT Roadster models. The system’s sophisticated dampers are filled with a magnetorheological fluid containing minute magnetic particles that can be influenced by an electromagnetic field. By applying a voltage to the system’s electromagnets, the viscosity of the fluid is altered by the affected magnetic particles, increasing resistance to damper movement to iron out pitch and roll when necessary, and reducing resistance when ride comfort takes precedence.

Stability at speed is also enhanced by an electrically powered rear spoiler which helps to increase down force on the rear of the TT Roadster, and retracts to sit flush with the body when not required.

As was the case with the original TT Roadster, the list of standard equipment for both versions is comprehensive. It includes powered roof and wind deflector operation, sports seats with leather and Alcantara mix upholstery for 2.0 TFSI versions or full leather for the V6, electronic climate control, a new generation MP3-com patible audio system with single CD player, an RS 4-style flat-bottomed leather-rimmed steering wheel and a Driver’s Information System (DIS). In addition to full leather upholstery, V6 versions add front seat heating, an enhanced braking system, an exterior light styling pack and quattro four-wheel-drive. Alloy wheels are 17-inch Trapez design in the 2.0 TFSI or 18-inch 10-spoke design in the V6.