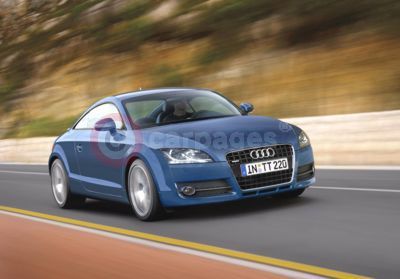 This is a cult car, an icon - right from the day it made its debut, in autumn 1998, the Audi TT took the sports coupé segment by storm, sharpening up the brand's profile in the process. Now the second generation of this successful model is making its debut. The new TT Coupé embodies sheer dynamism - in its design, in its engine output and in its performance.

The first generation of the TT has become a milestone in automotive design, an icon. The design adhered to pure geometric lines, embodying a functional purity and austerity harking back to the Bauhaus style of the 1920's. The core motifs were the circle and the curves of the roof line, front and rear end. This timeless architecture guaranteed that the Audi TT was an eminently recognisable presence out on the roads, and simultaneously gave the development of the entire brand decisive momentum.

Audi has lovingly retained and stylishly enhanced this genetic code. On the new TT the geometric shapes merge fluidly into a uniform whole. A low, narrow greenhouse is supported by slim pillars sitting on broad, powerful shoulders. The base body beneath is compact in looks, conveying a feeling of confidence and strength. The convex and concave curves of its surfaces lend it the character of an athletic sculpture straining forward.

The front end has gained greater expressiveness and resolve. The single-frame radiator grille serves as its defining element. The large air inlets hint at the potential of the engines, and the sharply cut, sloping headlights emphasise the mature appearance of the car. The rear end, characteristic of the TT, conveys power and dynamism through its wide wheel arches. The lights generate a three-dimensional effect thanks to their visual depth. The powerful exhaust tailpipes, the wide diffuser and the centred rear fog light echo the world of motor sport.

When the new Audi TT is stationary, its electrically operated rear spoiler is visible only as an unobtrusive lip. When the car reaches a speed of over 74 mph, the spoiler is extended in a two-dimensional curve motion, thereby improving the downforce on the rear axle. When the car's speed drops below 50 mph again, the spoiler automatically retracts. The underbody design also helps to reduce lift.