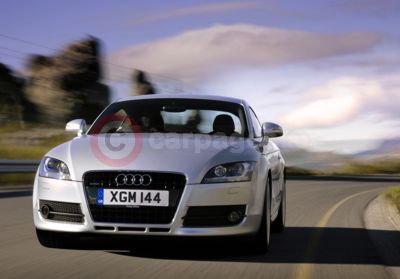 Jeremy Clarkson and his colleagues at the BBC's Top Gear Magazine have chosen the all new Audi TT to receive the 'Best Coupé' trophy in the 2006 Top Gear Awards, almost exactly five years after the team bestowed a similar honour on the original TT Coupé.

Jeremy and Top Gear editor Michael Harvey presented the prestigious award to AUDI AG's Head of Steering Systems, Georg Middelhauve, at a ceremony held last week in London. According to the magazine's editorial, the TT deserved to win through because: "it's a properly entertaining and engaging thing to throw down the road.  Just like the original, you'll remember the new TT.  Now not just for the way it looks, but also for the way it goes too."

Jeremy Hicks, Managing Director of Audi UK, applauded the decision: "The fact that the TT has already been highly praised in print by the Top Gear team on a number of occasions was heartening enough for us, but to win outright in the category, with endorsement from Jeremy, is real cause for celebration."

The new Audi TT - the prestige German manufacturer's iconic sports coupé - was officially unveiled in the UK just three months ago, its subtly updated skin concealing a superstructure and chassis that have undergone far more radical changes than first meet the eye.

With optimum weight distribution thanks to the hybrid body shell combining 69% aluminium content in the frontal section and 31% steel at the rear, the latest TT provides the best possible conditions in which the advanced sports suspension with optional magnetic ride and the powerful Turbo FSI four-cylinder and naturally aspirated V6 petrol engines can shine.

The original TT Coupé, launched in the UK in 1999, was itself no stranger to awards. Top Gear Magazine named it one of its "Favourites of the Year" in 2001, and it was voted Best Coupé for five consecutive years (1999-2003) by the team at What Car? Magazine.