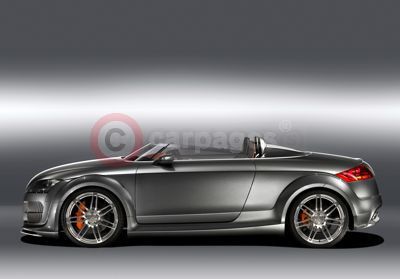 The Audi TT is noted for its clear lines, unmistakable dynamism and the driving characteristics of a sports car. Audi now presents the TT in its most purist form: the clubsport quattro study.

The goal that the development engineers set themselves for this vehicle study was to achive purism at a premium level. No hood, no A-post – instead, a wraparound windscreen kept extremely low which deliberately evokes images of a speedster. The flat, slightly tinted window strip surrounds the cockpit. The panoramic windscreen and the two humps located behind the interior in place of the hood compartment are reminiscent of a racing car. The rollover bars familiar from the TT Roadster are kept flatter and are the same height as the sports bucket seats.

The front end is dominated by the single-frame grille which has aluminium inserts to give its design a horizontal emphasis. This makes the TT clubsport quattro appear even flatter than it already is. The four rings of the logo are not located in the grille as on most Audi models, but on the bonnet. The large air inlets in the front end supply additional air to the more potent TFSI engine. LED daytime running lights provide an eye-catching highlight at all times of day. The visible stainless steel rear silencer is the striking feature in the rear bumper, while the blade under the rear silencer visibly underscores the vehicle’s sports character. The dual-branch exhaust system with its oval tailpipes calls to mind the sporty Audi production models such as the RS 4.

There is a deliberate lack of visual interruptions in the side line and you will look in vain for door handles. The TT clubsport quattro is opened by remote control: the doors spring open at the press of a button. The size of the two exterior mirrors has also been minimised. 20-inch wheels with tyres of size 265/30 R20 emphasise the car’s muscular appearance, as does its track width which has been increased by a total of 80 millimetres compared with a production TT. Not only that, but the wheel arches have also been enlarged additionally.

The car is painted Daytona Grey, a colour that Audi used for the first time on the RS 4 and the S8. The exterior design features dark shades of grey. This forms a contrast with the metallic elements, with the grille and side grille in Gun Metal, a steely colour which imbues the TT clubsport quattro with a look which is both sporty and pure. The brake callipers, the orange colour of which links the exterior design to the interior, provide a visual contrast. These bright colour highlights also provide attractive visual touches in the interior, on elements such as the instrument cowl, the armrest and on the back of the bucket seats. The black leather seat itself also boasts a special feature in the shape of a laser pattern worked into the seat. This was specially designed for the TT clubsport quattro and plays on the TT logo.

The sports character demonstrated by the exterior design is continued inside the car, where purism was also the driving element. Racing bucket seats are provided for both occupants. Together with four-point belts that are three inches wide, these offer both driver and passenger excellent support, even in extreme driving situations – on the racetrack, for example. The generous use of aluminium is characteristic of Audi. This starts with the steering wheel which is adorned with a twin spoke crafted from this lightweight metal. The pedals are also made of aluminium and exhibit a grooved structure. They consequently not only afford a better grip, but also help to save weight. Foot rests are provided for both driver and passenger in the TT clubsport quattro.