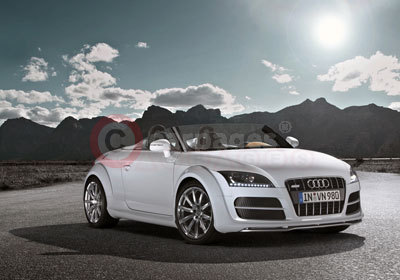 A new version of the crowd-pulling, speedster-style Audi TT clubsport quattro show car makes its debut this month at the Wörthersee Tour, the annual gathering of Audi and VW enthusiasts in Austria.

The latest generation of the car that caused a sensation at the event in 2007 bears slightly more resemblance to the road-going TT models, but its classic speedster inspiration is still very much in evidence, as is the extra special, 300PS version of the 2.0-litre Turbo FSI petrol engine - the most powerful example of this popular unit to date.

The show car’s A-pillars are nearly invisible, making the continuous window strip appear to be a single casting. Instead of the compartment for the soft top there are two humps behind the passenger compartment to further emphasise the speedster theme. Mounted in front of the humps are two massive rollover bars, which together with the strong A-pillars protect the driver and passenger if the car should roll over.

The front end is dominated by the powerful single-frame grille painted in high-gloss black. Beneath the headlamps, which feature a strip of LED daytime running lights, are large air inlets covered by horizontally split black grilles.

A distinctive spoiler lip optimizes downforce. When viewed from the side, the sharp contours in the sill area are every bit as striking as the boldly accentuated wheel wells, which house polished 19 inch wheels shod with 255/35 tyres. The track has also been widened by 66 millimetres (2.60 inches) compared with the production TT, giving the car an even more squat, purposeful stance. The fascia between the two large tailpipes of the stainless steel exhaust system emphasizes the horizontal lines and makes the car look even wider from behind, as does the rear bumper, which doubles as a diffuser. The purist style of the exterior carries over to the interior of the Audi TT clubsport quattro. The newly designed sill area emphasizes the width of the vehicle. The driver and passenger sit in racing bucket seats that offer excellent support even in extreme driving situations.

The clubsport quattro sports a high-grip version of the flat-bottomed steering wheel from the production TT with aluminium shift paddles. The door pull handle and door opener are also made of aluminium, and their cut-out appearance emphasizes the lightweight design character of the concept car. Aluminium pedals complete the look.

The second distinctive feature of the interior of the TT clubsport quattro is the colour orange. Leather in this colour provides bright highlights to the arm rests, the sides of the centre tunnel, the backs of the bucket seats and the instrument cowl. The orange and white graphics of the instrument cluster clearly distinguish it from its counterpart in the production model.

Technology borrowed directly from the world of motorsport enables the turbo charged 2.0 TFSI engine powering the TT clubsport quattro to break through the 300PS barrier. The exhaust system was also designed to be particularly easy-breathing, and its oval tailpipes emit a note which would not sound of place in a full-blown racing car.

Power is delivered via a rapid-shifting S tronic twin-clutch transmission to all four wheels courtesy of the quattro permanent all-wheel drive system, and the powerful brake system from the new Audi TTS scrubs off speed highly effectively. Its ventilated discs measure 340 millimeters (13.39 inches) up front and 310 millimeters (12.20 inches) at the rear.

The Audi TT clubsport quattro is a purist driving machine combining the performance of a sports car with the unique design language of Audi. Small-scale production of this model hasn’t been ruled out.