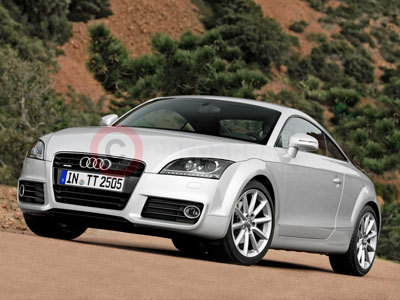 Audi designers and engineers have risen to the unenviable challenge of enhancing the celebrated Audi TT for the 2011 Model Year, creating a new generation model that combines measured yet distinct styling refinements with efficiency boosting technology, including a newly adopted 2.0-litre TFSI engine, which improves fuel economy by up to 14 per cent.

The upgraded 2.0-litre Turbo FSI petrol engine is the technological highlight in the latest range, employing Audi valvelift technology to effect improvements in power, torque and overall efficiency compared with the 200PS version it replaces. Delivering 211PS between 4,300rpm and 6,000rpm and a 350Nm torque peak between 1,600rpm and 4,200rpm, it enables the Audi TT 2.0 TFSI with six-speed manual transmission to reach 62mph from rest in 6.1 seconds - 0.5 seconds more rapidly than its predecessor - and raises its top speed from 149mph to 152mph. Even more impressively, it boosts economy potential from 36.7mpg in the combined cycle test to 42.8mpg, and pares back CO2 output from 183g/km to 154g/km.

A ground breaker in the sports car sector, the Audi TT 2.0 TDI continues to set the efficiency standard, covering up to 53.3mpg according to the combined cycle test, which corresponds to only 139 grams of CO2/km. With 170PS and 350 Nm of torque - the latter available between 1,750 and 2,500 rpm - the high-tech common rail injection engine powers the Audi TT to 62mph in 7.5 seconds and on to 140mph. The 2.0-litre TDI is mated to a manual transmission and quattro all-wheel drive. The quattro configuration provides substantially greater stability, traction and driving enjoyment, and is another unique selling point of the Audi TT in its class. It is also available in conjunction with the new 2.0-litre TFSI unit, and is a standard feature of the Audi TTS and the Audi TT RS.

A precise shifting six-speed manual transmission transfers power to the wheels regardless of the engine, with the S tronic dual clutch transmission available as an option for the new 2.0 TFSI. This transmission switches between its six gears with virtually no interruption to the supply of power either fully automatically or manually. Manual shifts can be made using the optional paddles on the steering wheel.

The dynamic spearhead of the Audi TT model series is the Audi TT RS, which is available as a Coupe or a Roadster. Its turbocharged, inline 5-cylinder engine draws 340PS of power from 2.5 litres of displacement. 450 Nm of torque is available between 1,600 and 5,300 rpm. In spite of this formidable power, up to 30.7mpg is possible according to the European cycle test.

The Audi TT RS Coupe rockets from 0 to 62mph in 4.6 seconds, and can reach a governed top speed of 155mph which can be raised to 174mph at extra cost. A sound flap in the exhaust system further intensifies the distinctive five-cylinder sound. A manual six-speed short-shift transmission currently channels power to the quattro permanent all-wheel drive, and later in 2010 a newly developed version of the S tronic twin-clutch transmission will also be offered as an option. The compact layout of the seven-speed, dual-clutch transmission makes it suitable for transverse mounting in combination with the quattro all-wheel drive system.

Equipped with S tronic, the Audi TT RS Coupe launches from rest to 62mph in 4.4 seconds - a fraction more quickly than the manual transmission version. Distinctive design details, 18-inch wheels and a powerful brake system are standard with the Audi TT RS.