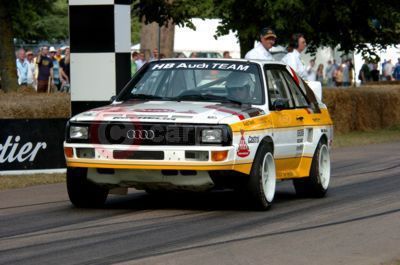 Rare Audi quattro to be demonstrated at Stoneleigh by history-making French lady driver.

Michelle Mouton makes a rare visit to Britain next weekend (23-25 Mar) to be re-united with her 1985 Pikes Peak Hillclimb winning Audi Sport quattro.

Mouton, one of the most successful and best-known female rally drivers of all time, opens Race Retro at the International Historic Motorsport Show at Stoneleigh Park near Coventry on Saturday (24 Mar).

The 55-year-old French lady driver, still the only woman to win a round of the World Rally Championship outright, swept the Audi to a then record time of 11mins 25.39secs in Colorado.

“I was very pleased to win the race for myself – it was the first outright victory ever scored by a woman – and proud for Audi as it was the first time a European manufacturer’s rallycar had won –it was something very special to beat the Americans on their home ‘soil’,“ remembers Michelle.

Michelle continues: “I was used to driving this Audi but the problem was the altitude. It starts at almost 9,500ft above sea level and we had to make adjustments to the electronic gearbox and turbocharger.

“The hillclimb itself was very difficult as it’s very fast and quite narrow with no markers and sheer drops off the side - the event’s ‘Race to the Clouds’ title is very true - and I think it was probably the toughest challenge in my career.

“There had been problems in testing which meant I wasn’t allowed to drive my car to the start, mechanics instead pushing me to the line, which made me mad and very determined. I really wanted to win, so I pushed very hard - sometimes almost too hard.”

In 1982, she achieved outright WRC wins in Portugal, Greece (Acropolis Rally) and Brazil - earning her second place in the Driver’s WRC - and ultimately contested 50 WRCs between 1974-86.

In 1981, the Audi quattro was the first car with four-wheel-drive and a turbocharged engine to compete in the World Rally Championship. Audi won the Manufacturers’ World Championship in 1982 and 1984 while Hannu Mikkola (1983) and Stig Blomqvist (1984) won the Drivers’ titles with Audi.

Hanlon purchased the Audi last March from a private collector in America, the ex-Mouton quattro having also been driven by Walter Röhrl (1985 Corsica WRC) and then successfully campaigned by John Buffum in North America.

“The car has been stripped back to a bare metal bodyshell and fully rebuilt over the last nine weeks,” confirmed Hanlon. “Every component has been re-furbished to Audi Sport specification and we have imported the original BBS split rim wheels which the car competed on at Pikes Peak in 1985. The car will be in its authentic livery and technical specification at Stoneleigh. The fact that this actual car competed in the very last Group B WRC round (1986 Olympus Rally) is a huge factor of it's appeal."