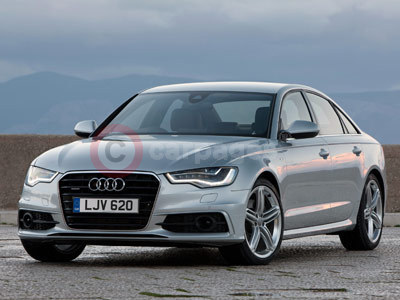 According to SMMT figures, Audi has topped the UK premium segment in February 2011, with total sales of 3,783, followed closely by BMW at 3,77.

Audi UK Director Jeremy Hicks tells us this is mainly due to the all new Audi A6:"While A8 and A7 are performing well, the volume at the top end is in the A6 segment," he said.

Product manager James Allitt added that the last A6 was launched in 2004 and the new car is "the last of the Germans to launch in this class" following BMW 5 series and Mercedes-Benz E-Class.

"It is without doubt the technology leader in its class," he added, alluding to two new features, an adaptive headlight linked to the satnav that gives a short, fat beam in built up areas and a long beam on motorways and also turns on additional side lights when approaching crossroads.

Another new feature is a small camera in the rear view mirror that reads speed limit signs and displays them on the head-up display.