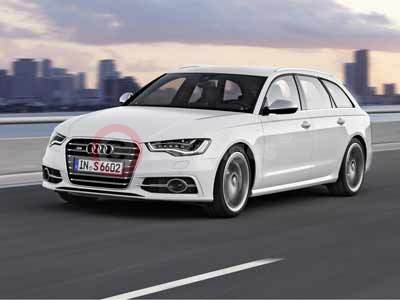 The 4.0 TFSI engine offers improved performance and reduced fuel consumption over the 5.3 litre V10 it replaces, offering 29.1mpg in the Audi S6 and 28.8mpg in the S6 Avant on the combined cycle. power is channeled through the fast shifting seven speed tronic transmission to the quattro permanent all-wheel drive system.

Enhanced performance is thanks, in part, to start-stop systems and a new 'cylinder on demand' cylinder management system which can deactivate four of the eight cylinders under part load to conserve fuel and improve efficiency. When this occurs, the Active Noise Cancellation system (ANC) is activated. The system features four microphones which are integrated into the headlining to record the noise in the cabin, which is analysed by a computer. If intrusive sound elements are detected, the system will broadcast antiphase sound through the sound system's speakers which will cancel out the intrusive sound.

The Audi S6 is 16mm longer than the A6, at 4931mm, the Audi S6 Avant is 8mm longer at 4634mm. Both models feature a single frame grille complete with aluminium applications and chromed horizontal double bars. A chrome strip also features on the front bumper. The exterior mirrors feature aluminium-look housing. Xenon headlamps have integrated LED daytime running lights and all-weather lights as standard, as are the LED rear lights.

The Audi S6 saloon boasts a spoiler on the boot lid, whilst the S6 Avant features a roof spoiler. The diffuser on the rear bumper on both models is platinum grey complete with an aluminium-look offset edge.
The Audi S6 models are available in eight colours which include the exclusive shades Estoril Blue, crystal effect and Prism Silver, crystal effect.

The Audi S6 and S6 Avant feature S6 badges on the key, the leather sports steering wheel and the instruments. The illuminated door sill trims and the displays for the MMI and the driver information system highlight the S6 logo on start-up. The footrest, the pedals and the soft keys of the MMI operating system are finished with an aluminium look.

Audi S6 Images may not be UK specification cars. Colours and exterior and/or interior elements may differ from actual models.